Maharashtra: Maratha groups to go ahead with statewide protests tomorrow 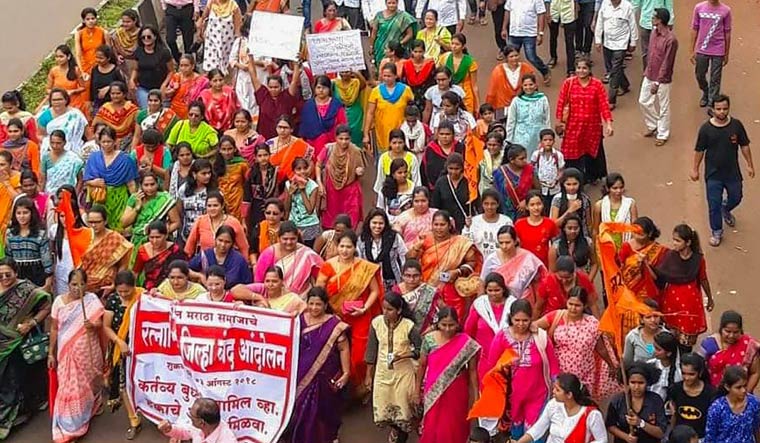 A protest for reservation by Maratha activists in Ratnagiri | PTI

Even as Chief Minister Devendra Fadnavis on Monday assured the Maratha community of meeting their demand for reservations by November, Maratha organisations have announced they would be going ahead with statewide protests on Thursday.

Police have stepped up security in Pune and other districts. Pune District Collector Naval Kishor Ram on Tuesday held a meeting of over 50 members and conveners of the Maratha Kranti Morcha (MKM).

Talking about the security measures, Patil said that besides the existing police force, three additional State Reserve Police Force (SRPF) companies and one Rapid Action Force (RAF) team will be deployed to ensure that there is no law and order situation in the district.

"We have decided to deploy 80 per cent police force towards the protest. In addition to that, three SRPF companies and one RAF team will be deployed at sensitive places in the district," he said.

According to Patil, security will be enhanced on the main highways passing through the district as the Maratha protesters might try to block the roads.

"All the community members have been asked to gather at their respective collectorate or tehsildar offices from 10am to 5pm on August 9 to express solidarity with the agitation," he said.

Maratha Kranti Morcha members will be holding a sit-in agitation outside the residence of NCP chief Sharad Pawar at Baramati (in Pune district) on Wednesday, Gaikwad added.

The Maratha agitation will coincide with the nationwide Bharat bandh called by dalit and farmer groups. The Maratha Kranti Morcha had called for a statewide bandh on July 24, followed by a shutdown in Mumbai the next day, which hit normal life in the financial capital of the country severely.

The Maratha Kranti Morcha had given a deadline of Tuesday (August 7) to the Fadnavis government to act on its demand for reservation in jobs and education.

The politically-influential Maratha community, constituting around 30 per cent of Maharashtra's population, has been agitating to press their demand for reservation in jobs and education under the OBC category.