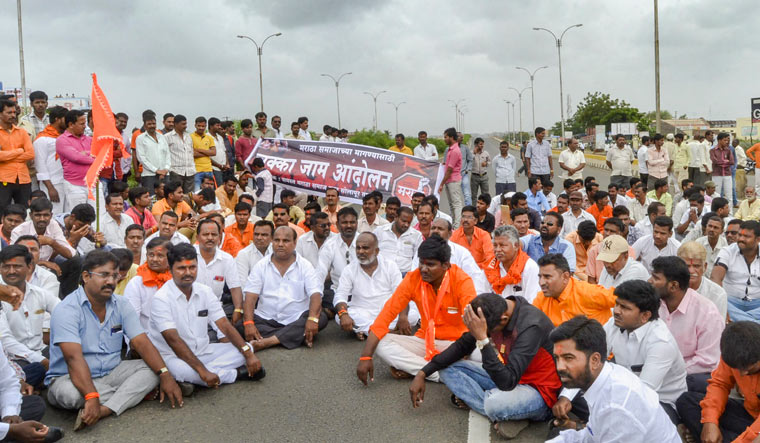 The Maratha Kranti Morcha, which has been leading protests for reservations for the community, on Thursday set a deadline of August 7 for the state government to act on the quota issue, warning of a fresh wave of protests from August 9.

The state government had requested additional security forces from the Centre, fearing more protests on the Maratha issue from August 9.

"All we want is quota in education and government jobs," said MKM leader Abasaheb Patil who held a sit-in protest in Parli town in Beed district, 370km from Mumbai.

The Maratha Kranti Morcha leader said there is nothing left now that needed to be discussed with the government on the issue.

The MKM is the umbrella body of Maratha groups demanding 16 per cent reservation under the OBC category.

"If the state government fails to grant us reservation by August 7, then a massive agitation will be held across the state," he said.

He said the Maratha youth has lost trust in the government, as it is dragging its feet on implementing reservation.

The police had detained at least 3,000 youth from the Maratha community for holding violent protests last week, of whom around 500 are facing serious criminal charges such as attempt to murder.

"Despite assurance from the chief minister, no police station has started withdrawing the cases against the youth," claimed Vinod Pokharkar, another leader of the Maratha community.

Chief Minister Devendra Fadnavis on Thursday reiterated that the government is committed to granting quota to the Maratha community that can stand legal scrutiny.

The Maharashtra State Backward Class Commission is currently conducting a survey to assess socio-economic backwardness of the Maratha community.

The state government had announced that it will convene a special session of the legislature to discuss the Maratha quota demand, after the panel submits its report.

The Maratha Kranti Morcha had organised a statewide bandh—excluding Mumbai and some other districts on July 24 on the reservation issue. The next day, the group staged a bandh in Mumbai, Navi Mumbai, Thane and other adjoining areas, which resulted in attacks on buses and stoppage of local trains.

A 21-year-old unemployed man, belonging to the Maratha community, allegedly committed suicide by hanging in Aurangabad city on Thursday, the police said.

Umesh Atmaram Indait hanged himself at his house in Choudhary Colony in Chikalthana area on Thursday afternoon, a senior police official said. A purported suicide note by Indait said he was jobless.

"I did not fulfil the dreams of my parents. I am still jobless even after completing my BSc because I belong to the Maratha community," it said.

As Maratha organisations are agitating for reservation in jobs and education for the community, at least six cases of suicide by young Maratha men were reported in the last two weeks.

In all these cases, the victims purportedly mentioned that they were ending their life for the cause of the Maratha quota, or because they were frustrated over lack of job and education opportunities, the police said.