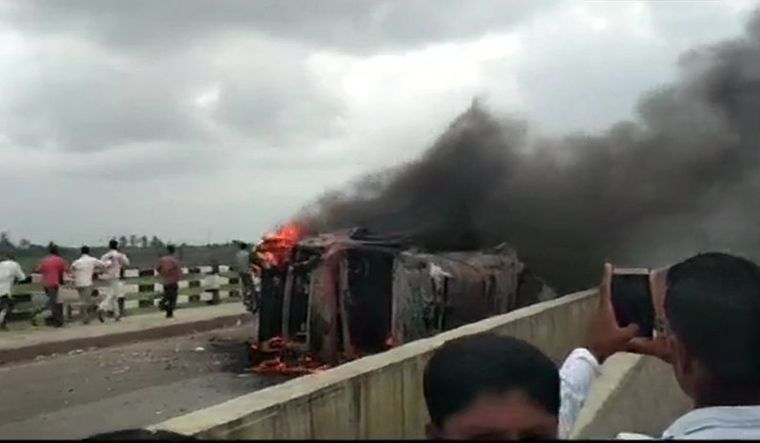 The suicide of a Maratha youth in the Godavari river on Monday has once again brought to the fore the social tension in rural Maharashtra as the Maratha Kranti Morcha gave a shutdown call across the state on Tuesday.

Violent protests led by Maratha community youth erupted in parts of Maharashtra on Tuesday, with the protesters demanding reservation in jobs and education.

The immediate reason behind Tuesday's agitation was the suicide of Kakasaheb Shinde. Shinde is alleged to have jumped into the Godavari river as part of the 'Jal Samadhi' agitation organised in Aurangabad district.

According to reports, Shinde was a Shiv Sainik and driver by profession. Shinde had participated in almost all the Maratha Kranti Morcha events. Belonging to a family of farmers, he had completed his SSC. Shinde's family owns just an acre of land and his younger brother is still studying. Shinde took up a job as a driver to support his family. He was working for a local Shiv Sena youth wing leader as a driver.

Restive Maratha community youths have once again started their agitation in support of their demands of quota in jobs and education. They want the recruitment process for 76,000 government jobs to be put on hold till they get reservation.

On Monday, angry protests in Pandharpur forced Maharashtra Chief Minister Devendra Fadnavis to cancel his visit to the temple town to perform the puja of Lord Vithoba on the auspicious day of Ashadhi Ekadashi.

This year, however, the Maratha Morcha organisers had declared that they would not allow Fadnavis to perform the puja at the Vithoba temple in Pandharpur. The Maratha activists had taken this stand to protest what they termed as government inaction over demands of the Maratha community like reservation.

But the protesters did not yield to the pressure and Fadnavis had to cancel his Pandharpur visit. Instead, Fadnavis performed the puja of Lord Vithoba at his official residence in Mumbai.

Maratha Kranti Morcha leadership, which gave a call for a statewide shutdown on Tuesday, made sure that they dropped districts of Satara, Solapur, Pune and Mumbai from the shutdown to enable lakhs of pilgrims to return from Pandharpur.

The Maratha Kranti Morcha leadership now wants an apology from Fadnavis for his remarks that there were plans to cause violence during his visit to Pandharpur.