Rahul Gandhi says 'mahagathbandhan' is a sentiment of people

However, remains silent when asked who would lead the grand alliance 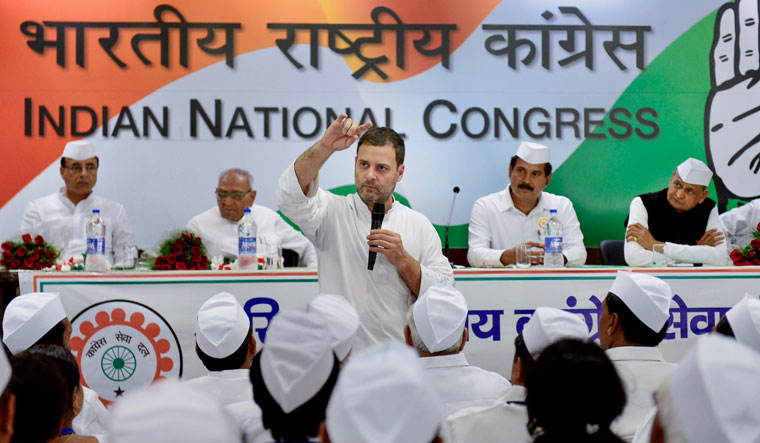 A "mahagathbandhan" (grand alliance) of the opposition to take on Prime Minister Narendra Modi, the BJP and the RSS is the sentiment of the people and not just political parties, Congress President Rahul Gandhi said on Wednesday.

Lashing out at Modi and the ruling party, Rahul Gandhi alleged that the prime minister and the BJP were attacking the Constitution and other institutions of the nation.

"It is the sentiment of the people and not just political parties which are opposed to the BJP, to have a 'mahagathbandhan' that can take on the BJP, the RSS and Prime Minister Narendra Modi," Rahul Gandhi told reporters in Mumbai.

However, he remained silent when asked who would lead the grand alliance of the opposition parties.

"Prime Minister Modi and the BJP are attacking the Constitution and institutions of the nation," he alleged, saying the question faced by the people was how to stop this.

The Congress is trying to join together these voices and the work is going on, Rahul
Gandhi said.

The 47-year-old Congress leader is on a two-day visit to Maharashtra that began on Tuesday.

He said the opposition has been asking Modi to bring prices of petrol and diesel under the Goods and Services Tax (GST) to provide relief to the common man, but "he is not interested."

"There was an attack on Mumbai (through demonetisation). There are small industries, traders here... the leather industry and the cloth industry are all here. They were attacked by the 'Gabbar Singh Tax' (implying the GST by drawing a reference to the celluloid bandit Gabbar Singh)," Rahul Gandhi said.

"The whole country is sad, small businessmen are sad because of demonetisation and we are fighting for them," he said.

Rahul Gandhi said during the UPA government's rule, the crude price was $130 a barrel that has now come down to $70 a barrel.

"However, the benefit has not been passed on to the common man. Where does this money go? In the pockets of a handful of 15 to 20 rich people," he alleged.

Rahul Gandhi had on Wednesday accused the Modi government of creating hatred and division in the society and betraying farmers as well as youth in the country.

Addressing a convention of Mumbai booth-level Congress workers here last evening, he alleged that Modi was a "chowkidar" only for a handful of industrialists and not the common man.

He had also accused Modi of "humiliating" BJP veterans Atal Bihari Vajpayee, L.K. Advani and Jaswant Singh and their families, and alleged that it was his "way of protecting Indian culture".