TDP adopted a resolution vowing to dethrone the “anti-people” BJP 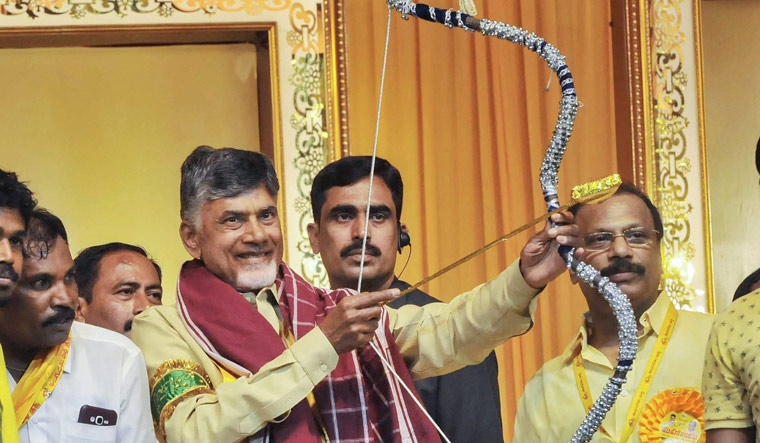 The Telugu Desam Party (TDP) adopted a new resolution in which it lambasted the NDA government for its “dictatorial” attitude towards states, as its leaders vowed to unite regional parties to dethrone the “anti-people” BJP in the 2019 Lok Sabha polls.

The resolution passed at the TDP's three-day annual conclave “Mahanadu”, that began here on Sunday, alleges that the Centre was weakening the financial condition of states.

“The unilateral style of functioning of the Modi government has led to a loss of trust of states in the central government. The states feel that the concept of federalism is only on paper,” the resolution reads.

The “dictatorial” attitude of the Modi government, its “unilateral and anti-people decisions, misuse of central agencies to suppress political opponents have become a matter of grave concern in the Indian polity”, it reads.

In March, the TDP pulled out of the NDA government over the Centre's refusal to grant special status to Andhra Pradesh.

The party claimed it played a “pivotal role” in forming five out of the six non-Congress governments in Delhi, except the Janata Party government, and that Chief Minister N. Chandrababu Naidu played an important role in the national politics.

As the convenor of the United Front, Naidu was responsible for uniting non-Congress parties and made H.D. Deve Gowda and I.K. Gujral prime ministers. Thus, he proved it was possible for regional parties to form a government at the Centre, the TDP document says.

“N. Chandrababu Naidu was a tall leader in this meet and it was a clear indication that regional political parties are going to be a power to reckon with in the 2019 elections as an alternative to national parties to form a government in Delhi,” the TDP resolution reads.

In his concluding address at the conclave, Naidu said, “We ended the alliance with the NDA only in the interests of the states.”

He alleged the BJP was “resorting to conspiracy to destabilise us”.

“We are not afraid of anyone and are ready to sacrifice everything. We will not stop until Andhra is given special status and the Polavaram project completed,” he said.

He alleged the Centre had not been releasing funds for Amaravati as it “did not want” a world-class capital city to come up in Andhra. “Then why should we pay taxes to the Centre at all?”

He also rubbished criticism that his government was spending all the money at its disposal on developing Amaravati, the proposed ultra-modern capital, at the cost of other developmental works.

Ratcheting up his attack on the Centre, he said, “In 2014, the unemployment rate was 3.4 per cent and now it is 6.23 per cent. Where is the 'sabka sath sabka vikas' that Modi promised to the people?”

He also denounced the Congress for “not doing justice to the people of Andhra and Telangana” at the time of the state's bifurcation.

“We asked the Congress to do justice to Andhra Pradesh and Telangana, but they did not do it. They lost in both the states.”

He said the TDP will win all 25 LS seats in the state in 2019 and bring drastic changes in national politics. “The NDA won't come to power,” he announced.

State Finance Minister Yanamala Ramakrishnudu said the Modi government was taking “dangerous steps” against constitutional values and that it would be “dethroned by united regional parties” in 2019.

“We respected Vajpayee and Advani who revered and protected the Constitution. But then came the Modi-Shah duo. They destroyed the entire democratic system.

“The Modi government's policies are against secularism,” he alleged. “The ruling party uses RSS cadres, who have a fascist mentality. It is also spoiling fiscal and political values.”

The BJP government would be “dethroned” by an amalgamation of regional parties, he said, but parried a query on who would be the prime ministerial face if a united front comes into being.

Preaching against corruption after declaring B.S. Yeddyurappa, implicated in corruption cases, as the chief minister of Karnataka and supporting people such as “mining mafia” Janardhan Reddy and Y.S. Jaganmohan Reddy looks like a joke by the BJP government, he said.

Approaching the NGT on “flimsy” grounds, filing false cases against the Polavaram project and delays in the release of funds by the Centre are examples of collusion between the BJP and the YSRCP, Naidu's party alleged.

The “political manipulations” in Kerala, Tamil Nadu, Karnataka and Andhra are examples of the BJP's conspiracy to weaken efficient state leaders, the TDP alleged.

“However, the recent guidelines of the 15th Finance Commission reveal that the terms of reference prescribed by the Centre hit the financial capabilities of the states,” the TDP resolution alleges.