Zoji La Tunnel: All you need to know 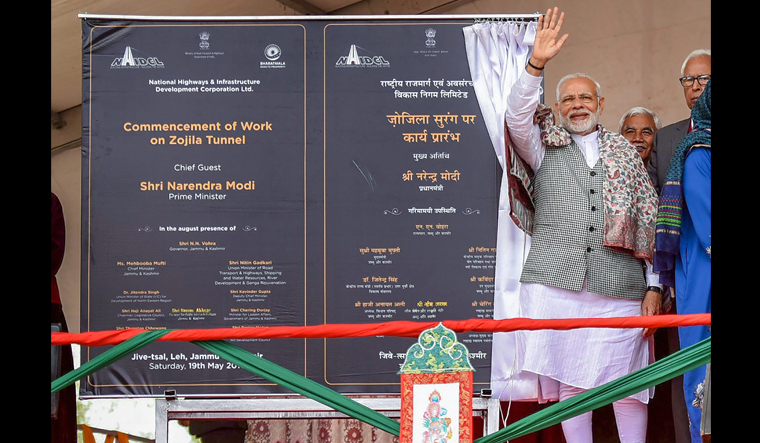 Prime Minister Narendra Modi at an event to mark the commencement of work on Zoji la Tunnel, in Leh on Saturday | PTI

The National Highway 1A (NH1A) is a stretch of road connecting the lush valley of Kashmir, the Kargil district and the arid desert of Ladakh. A long and winding drive, it is one of the most unique trips that one can experience. The ‘Zoji La’ pass, at 11,575 ft., is the second highest point on the highway, after ‘Fotu La’.

For all its beauty, the pass has several pronounced drawbacks. The road is extremely narrow in places, so much so that two vehicles cannot pass each other. It also has several landslide and avalanche prone areas, which have been the cause for countless accidents over the years.

The drive through Zoji La is long and difficult. It is impassable in the winter months due to heavy snowfall. But the Zoji La tunnel, inaugurated by PM Narendra Modi on Saturday, will be the answer to all these woes.

The tunnel will cut through mountains, providing a safer and quicker alternative to the Zoji La pass. It will connect the Kashmiri hill-station Sonmarg to the town of Dras in Kargil. The two lane tunnel will be more than 14 km long.

When completed, it will be Asia’s longest bi-directional tunnel and a veritable marvel of engineering. This ambitious project is in the hands of IL&FS Transportation, who were the lowest bidders in the auction last year. According to their estimates, it will cost the government just under Rs. 5000 crore.

The Zoji La tunnel will likely have an unprecedented impact on the entire region. Currently, the NH1A is one of the only two routes to access the region of Ladakh. The other route makes its way from Manali, Himachal Pradesh straight up north through the Rohtang pass, into Ladakh. This road, if possible, is even more dangerous than the NH1A and is absolutely impossible to navigate in the winter due to snowfall and fast flowing streams that often envelop the road.

This geographical isolation is one of the reasons why economic growth is stunted in Ladakh. Even native inhabitants choose to migrate south when winter sets in as tourists begin to dry up and supplies become scarce.

When the Zoji La tunnel opens for business, it will become the fastest and safest route into Kargil and Ladakh, cutting down the time for travelling to just 15 minutes.

During its construction, the Zoji La tunnel is expected to provide jobs to thousands of local youths. When completed, it will definitely boost the economies of both Kargil and Ladakh as supplies would be cheaper, fresher and available the whole year round. Winter tourism will also become a viable option.

The tunnel is also a strategic win for the Indian defence forces. The national highway that makes its way through the Zoji La Pass is very vulnerable to attack. In the 1999 Kargil war, Pakistani forces were able to hold the entire sector of Ladakh hostage by simply shelling the highway from their mountain-perches. The tunnel will be less vulnerable to attack and will provide enhanced mobility to the Indian Defence forces in the area.

The Zoji La tunnel is expected to be operational in five years.