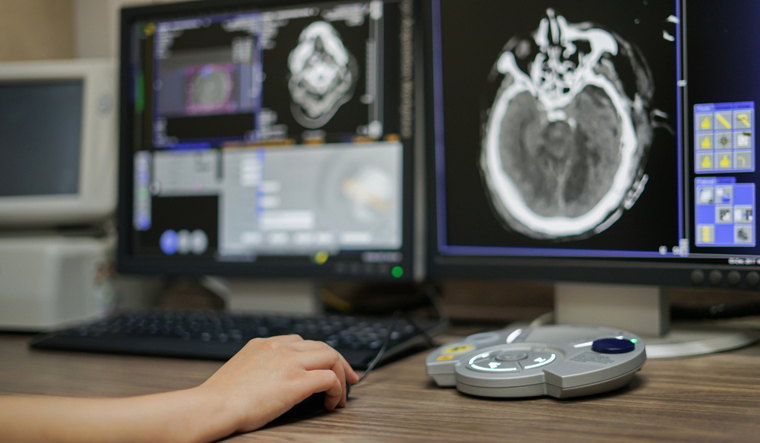 The research, published in Nature Medicine, solves a 60-year problem of how to detect the hormone producing nodules without a difficult catheter study that is available in only a handful of hospitals, and often fails. The research also found that, when combined with a urine test, the scan detects a group of patients who come off all their blood pressure medicines after treatment.

128 people participated in the study of a new scan after doctors found that their Hypertension (high blood pressure) was caused by a steroid hormone, aldosterone. The scan found that in two thirds of patients with elevated aldosterone secretion, this is coming from a benign nodule in just one of the adrenal glands, which can then be safely removed. The scan uses a very short-acting dose of metomidate, a radioactive dye that sticks only to the aldosterone-producing nodule. The scan was as accurate as the old catheter test, but quick, painless and technically successful in every patient. Until now, the catheter test was unable to predict which patients would be completely cured of hypertension by surgical removal of the gland. By contrast, the combination of a 'hot nodule' on the scan and urine steroid test detected 18 of the 24 patients who achieved a normal blood pressure off all their drugs.

Professor Morris Brown, co-senior author of the study and Professor of Endocrine Hypertension at Queen Mary University of London, said: "These aldosterone-producing nodules are very small and easily overlooked on a regular CT scan. When they glow for a few minutes after our injection, they are revealed as the obvious cause of Hypertension, which can often then be cured. Until now, 99% are never diagnosed because of the difficulty and unavailability of tests. Hopefully this is about to change."

Professor William Drake, co-senior author of the study and Professor of Clinical Endocrinology at Queen Mary University of London, said:"This study was the result of years of hard work and collaboration between centres across the UK. Much of the 'on the ground' energy and drive came from the talented research fellows who, in addition to doing this innovative work, gave selflessly of their time and energy during the national pandemic emergency. The future of research in this area is in very safe hands."

In most people with Hypertension (high blood pressure), the cause is unknown, and the condition requires life-long treatment by drugs.

Previous research by the group at Queen Mary University discovered that in 5-10% of people with Hypertension the cause is a gene mutation in the adrenal glands, which results in excessive amounts of the steroid hormone, aldosterone, being produced. Aldosterone causes salt to be retained in the body, driving up the blood pressure. Patients with excessive aldosterone levels in the blood are resistant to treatment with the commonly used drugs for Hypertension, and at increased risk of heart attacks and strokes.

The research, conducted on patients at Barts Hospital, Cambridge University Hospital, and Guy's and St Thomas's, and Universities of Glasgow and Birmingham, was funded by the National Institute for Health and Care Research (NIHR) and Medical Research Council (MRC) partnership, Barts Charity, and the British Heart Foundation.