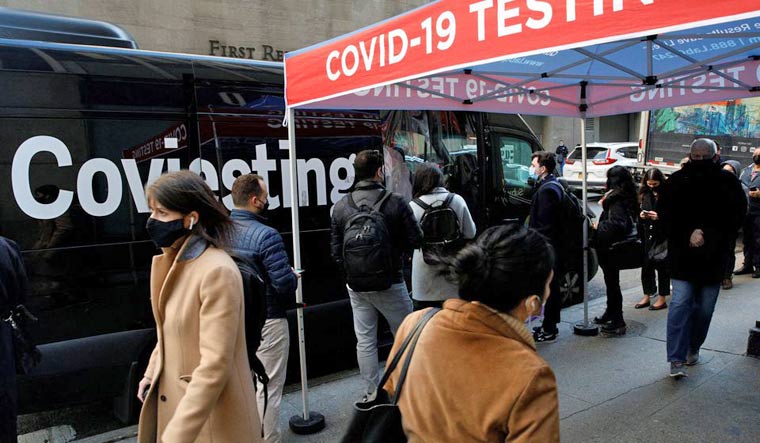 Scientists have found that indoor relative humidity may also influence transmission of the COVID-19 virus, according to a study.

Relative humidity is the amount of moisture in the air compared to the total moisture the air can hold at a given temperature before saturating and forming condensation.

In a study, conducted by researchers from the Massachusetts Institute of Technology (MIT), the research team reported that maintaining an indoor relative humidity between 40 and 60 per cent is associated with relatively lower rates of Covid-19 infections and deaths, while indoor conditions outside this range are associated with worse Covid-19 outcomes.

To put this into perspective, most people are comfortable between 30 and 50 per cent relative humidity, and an airplane cabin is at around 20 per cent relative humidity. The findings, that appear in the Journal of the Royal Society Interface, are based on the team's analysis of Covid-19 data combined with meteorological measurements from 121 countries where at least one outbreak had occurred, from January 2020 through August 2020. Their study suggests a strong connection between regional outbreaks and indoor relative humidity.

In general, the researchers found that whenever a region experienced a rise in Covid-19 cases and deaths prevaccination, the estimated indoor relative humidity in that region, on average, was either lower than 40 per cent or higher than 60 per cent regardless of season.

Nearly all regions in the study experienced fewer Covid-19 cases and deaths during periods when estimated indoor relative humidity was within a "sweet spot" between 40 and 60 percent.

"Indoor ventilation is still critical," said co-author Lydia Bourouiba. "However, we find that maintaining an indoor relative humidity in that sweet spot - of 40 to 60 percent - is associated with reduced Covid-19 cases and deaths."

Verheyen and Bourouiba examined whether Covid-19 is influenced instead by indoor - rather than outdoor - conditions, and, specifically, relative humidity.

After all, the researchers noted, that most societies spend more than 90 per cent of their time indoors, where the majority of viral transmission has been shown to occur. Further, indoor conditions can be quite different from outdoor conditions as a result of climate control systems, such as heaters that significantly dry out indoor air.

For more answers, the team focused on the early period of the pandemic when vaccines were not yet available, reasoning that vaccinated populations would obscure the influence of any other factor such as indoor humidity.

For each country, they also tracked the local Covid-19 related policies, such as isolation, quarantine, and testing measures, and their statistical association with Covid-19 outcomes.

For instance, guidelines report that humans are comfortable between 66 to 77 degrees Fahrenheit indoors. They also assumed that on average, most populations have the means to heat indoor spaces to comfortable temperatures and accordingly they calculated the associated drop in indoor relative humidity, the study said.

Finally, they also collected experimental data, which they used to validate their estimation approach, the study said.

While outdoor humidity remained around 50 per cent throughout the year, indoor relative humidity for countries in the Northern and Southern Hemispheres dropped below 40 percent in their respective colder periods, when Covid-19 cases and deaths also spiked in these regions, the study observed.

"We saw more reported Covid-19 deaths on the low and high end of indoor relative humidity, and less in this sweet spot of 40 to 60 per cent," Verheyen said.

"This intermediate relative humidity window is associated with a better outcome, meaning fewer deaths and a deceleration of the pandemic," Verheyen said.

"Indoor relative humidity emerges in a robust manner as another mitigation lever that organizations and individuals can monitor, adjust, and maintain in the optimal 40 to 60 per cent range, in addition to proper ventillation," said Bourouiba.