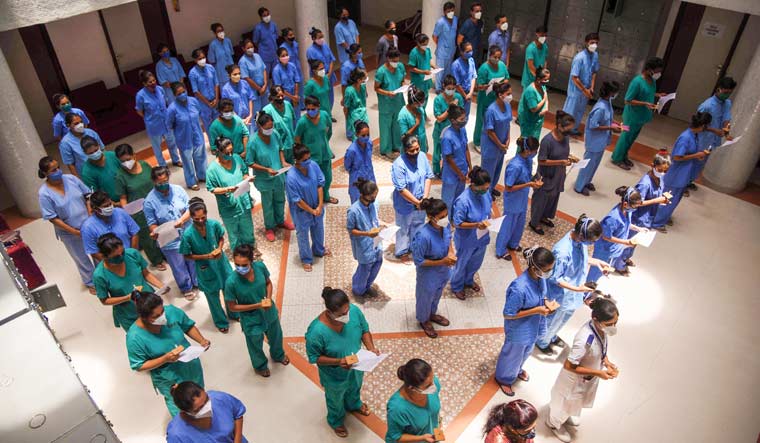 Excessive workload with erratic timings accentuated by the extended duration of inconvenient personal protection equipment usage, periods of quarantine, long durations of separation from family, risk of infecting families and stigma from community were among the most common issues reported by healthcare workers involved in the COVID-19 management, according to an ICMR study.

The study was conducted between September and December last year through telephonic interviews with 111 healthcare workers (HCWs) involved in the COVID-19 management across 10 states.

Most respondents expressed that the erratic work timing was a challenge across all layers that included doctors, nurses, ambulance drivers and supporting staff. Many of them also reported that this, along with the workload, did not allow them to take their eligible leave to go home to be with their families.

"All participants faced difficulty in balancing their work and family life. The most frequent issue reported was the long duration of separation from their families. Many reported the difficulties of long distance travel away from families, leaving them with a constant feeling of longing and sadness," the study said.

There was also constant fear of losing their job if they did not agree to travel away from home for long periods as expected from them.

This was particularly pronounced among women HCWs with infants and children who had to face challenges of caregiving being physically absent, as well as the fears associated with infecting their little ones who demanded their full attention when physically present at home.

"All participants expressed that their biggest concern was the risk of infecting their families with their exposure to COVID-19. This was more pronounced for HCWs who were staying with their families, who lived in perpetual fear of carrying infection home to their families, especially those family members with comorbid conditions," the study said.

Experiences of stigma and rejection that resulted from caring for COVID-19 patients were reported by a majority of the HCWs.

This was manifested in many ways. Most of them said that people around them—neighbours, friends and relatives—made them feel they were spreaders of COVID-19 infection and avoided them, sometimes making hurtful remarks and also showed reluctance to interact with them, the study said.

Some HCWs reported that they also had to conceal their identities to prevent any social harassment. There were also some who reported stigma from their own families.

The increase in workload with the long working hours has had an impact on their sleep cycle as described by most of the HCWs, the study stated. Many of them also had an increased risk of sleep deprivation with the constant worry about work and experiences at work that affected their sleep even when they tried to sleep.

Another major problem expressed by all of them was the irregularity in their eating routine. Keeping up with regular meal times was not possible which led to various health problems. Many of them also reported that they had to skip eating food because of wearing the PPE kit for long hours, the study said.

Coping strategies included peer, family support and the positive experiences manifested as appreciation and recognition for their contribution during the pandemic.

The total number covered was 111 participants across the sites with 9-11 respondents per site which was sufficient to reach saturation, crucial for qualitative data analysis.

There was a fairly similar representation of gender in this study with 54 per cent females and 46 per cent males. The respondents were primarily in the age group between 20 and 40 years.

"The study demonstrates the psychological burden of HCWs engaged with COVID-19 care services. The study findings point to need-based psychosocial interventions at the organizational, societal and individual levels.

"This includes a conducive working environment involving periodic evaluation of the HCW problems, rotation of workforce by engaging more staff, debunking of false information, community and HCW involvement in COVID sensitization to allay fears and prevent stigma associated with COVID-19 infection/transmission and finally need-based psychological support for them and their families," the study said.