‘All vaccines around the world have sometimes high, sometimes low efficacy’ 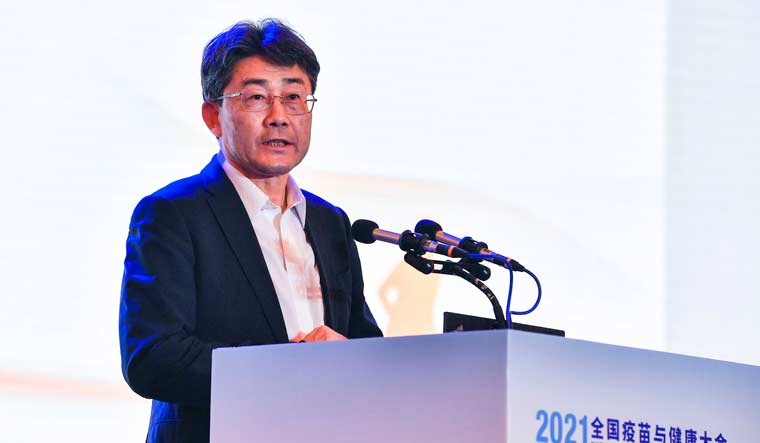 Gao Fu, director of the China Centers for Disease Control, speaks at the National Vaccines and Health conference in Chengdu in southwest China's Sichuan province Saturday, April 10, 2021. (Chinatopix Via AP)

After the head of China’s Centres for Disease Control (CDC) said that vaccines made in the country had a low efficacy, the official has backtracked, saying his words were misinterpreted in a “complete misunderstanding”.

On Saturday at a conference in the southwestern city of Chengdu, Gao Fu, CDC director, said that current vaccines "don't have very high rates of protection”. As a solution, he suggested China mix COVID-19 vaccines together to boost efficacy, and change the number of doses being administered and the length of time.

However, after his comments were heavily reported on suggesting he was saying China’s own vaccines had low efficacy, he spoke to Global Times and said "protection rates of all vaccines in the world are sometimes high, and sometimes low...how to improve their efficacy is a question that needs to be considered by scientists around the world.”

Vaccines made by Sinovac, a private company, and Sinopharm, a state-owned firm, have made up the majority of Chinese vaccines distributed to several dozen countries including Mexico, Turkey, Indonesia, Hungary, Brazil and Turkey.

The effectiveness of a Sinovac vaccine at preventing symptomatic infections was found to be as low as 50.4 per cent by researchers in Brazil, near the 50% threshold at which health experts say a vaccine is useful. By comparison, the Pfizer-BioNTech vaccine has been found to be 97 per cent effective.

A Sinovac spokesman, Liu Peicheng, acknowledged varying levels of effectiveness have been found but said that can be due to the age of people in a study, the strain of virus and other factors.

Beijing has yet to approve any foreign vaccines for use in China.

Gao gave no details of possible changes in strategy but cited mRNA as a possibility.

"Everyone should consider the benefits mRNA vaccines can bring for humanity," Gao said. "We must follow it carefully and not ignore it just because we already have several types of vaccines already."

Gao previously questioned the safety of mRNA vaccines. He was quoted by the official Xinhua News Agency as saying in December he couldn't rule out negative side effects because they were being used for the first time on healthy people.

Chinese state media and popular health and science blogs also have questioned the safety and effectiveness of the Pfizer-BioNTech vaccine. As of April 2, some 34 million people in China have received both of the two doses required for Chinese vaccines and about 65 million received one, according to Gao.

China currently has five vaccines in use in its mass immunization campaign, three inactivated-virus vaccines from Sinovac and Sinopharm, a one-shot vaccine from CanSino, and the last from Gao’s team in partnership with Anhui Zhifei Longcom.