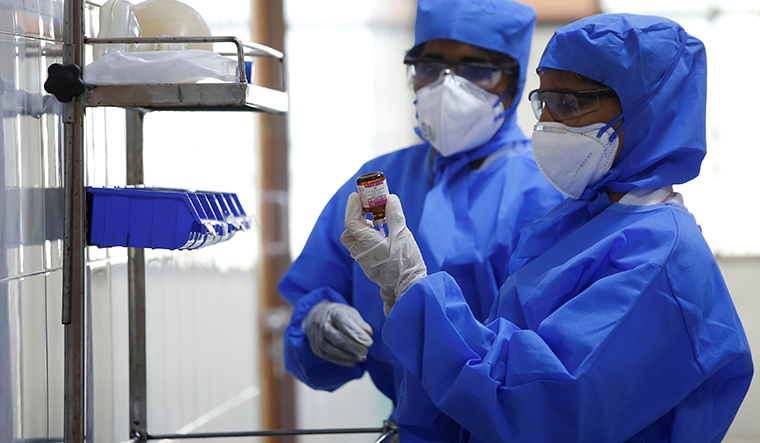 On May 9, the Union ministry of health and family welfare issued the revised discharge policy for COVID-19, thereby categorizing patients based the on clinical severity and symptoms.

Accordingly, in the first category come patients who are very mild/presymptomatic cases admitted to a CCC or COVID Care Centre. They will undergo regular temperature and pulse oximetry monitoring and will be discharged after ten days of symptom onset if there's no for three days. There will be no need for testing prior to discharge. At the time of discharge, the patient will be advised to follow the home isolation for further seven days as per guidelines. At any point of time, prior to discharge from CCC, if the oxygen saturation dips below 95 per cent, the patient is moved to Dedicated COVID Health Centre (DCHC). After discharge from the facility, if he/she again develops symptoms of fever, cough or breathing difficulty, he/she will contact the COVID Care Centre or State helpline or 1075. His/her health will again be followed up through tele-conference on 14th day.

In the second category are those clinically classified as 'Moderate cases' who are admitted to Dedicated COVID Health Centres with oxygen beds. These patients will undergo monitoring of body temperature and oxygen saturation. If the fever resolves within three days and the patient maintains saturation above 95 per cent for the next four days (without oxygen support), such a patient will be discharged after 10 days of symptom onset if there is absence of fever without antipyretics, resolution of breathlessness and no oxygen requirement. But in the case of this category of patients, too, there will be no need for testing prior to discharge and they will be asked to follow home isolation for seven days.

Then comes the third category of patients who are 'severe cases' or immunocompromised such as HIV patients, transplant recipients or those suffering from some form of malignancy. For these kind of patients who are on oxygenation, whose fever does not resolve within three days and demand of oxygen therapy continues, discharge will be given only upon clinical recovery, their ability to maintain oxygen saturation for three consecutive days and if they test negative once by RT-PCR (after resolution of symptoms).

The biggest concern which this revised discharge policy raises is that patients with mild and moderate symptoms will not be tested before they're given discharge from the hospital. The problem is, do we know for sure that the patient is not carrying the infection just because there are no more symptoms seen after ten days? Earlier, in its March 17 guidelines, the ministry had specified that all COVID-19 patients, across categories had to test negative twice on two consecutive RT-PCR tests before being discharged from hospitals. “In hospitalized patients with confirmed COVID-19 infection, repeat URT samples should be collected to demonstrate viral clearance. Specimen collection should be done at least every two to four days until there are two consecutive negative results (of URT samples) in a clinically recovered patient at least 24 hours apart,” said the ministry's earlier guidelines. While states will be able to discharge more patients based on the new policy, experts do not rule out the possibility that in some cases patients will continue to shed the virus after ten days. They believe that this is an intentional effort towards preserving testing kits and hoping that people will remain in isolation.

On May 13, Congress spokesperson Sushmita Dev demanded a reversal of the new discharge policy, saying else India could be in the same situation as the United States and Europe which have seen a spurt in COVID-19 cases. According to her, discharging very mild, mild and pre-symptomatic patients without them undergoing final tests for coronavirus will prove disastrous for the country. Experts do not rule out the possibility that in some cases patients will continue to shed the virus after ten days. They believe that this is an intentional effort towards preserving testing kits and hoping that people will remain in isolation. At the time of writing this report, the number of total active cases in India is 49,219. This means that if earlier protocol of testing twice is to be followed, India will have to conduct 9,84238 tests, which means close to one lakh tests. This in addition to the tests being carried out for finding new cases, which for instance on May 13 were 3,525, as per government data. As per the Press Information Bureau, on May 1, against a demand for 35 lakh combined RT PCR testing kits, ICMR has ordered more than 21 lakh and close to 14 lakh kits have already been received.  As of May 14, India has tested a total of 19,47,041 COVID samples.

Answering the reason for a change in discharge policy, the ministry's FAQ page said, “several countries have changed the criteria for discharge from 'test-based strategy to symptom-based strategy 0r time-based strategy’. A review of ICMR laboratory surveillance data also indicated that after initial RT-PCR positive results, patients became negative after a median duration of ten days. Recent studies have also suggested that the viral load peaks in the pre-symptomatic period (two days before symptoms) and goes down over the next seven days.” Being cured of a disease may have different connotations for general public, treating doctors and the virologists, states the ministry. “Unless there is a fear of resurgence of infection and subsequent transmissibility of an infection, resolution of clinical manifestation is usually taken as an evidence for cure.”

As per reports, as soon as some districts in Maharashtra's Vidarbha started implementing the revised discharge policy for COVID-19 patients, the recovery rate in the region nearly doubled. The BMC in Mumbai, too, has started following Union government’s latest protocol on discharge with its officials saying that the new discharge policy will help free beds quicker. "In ten days, there is no way to know whether the patient has developed immune response or not. Even if the symptoms disappear and the patient is negative, he still remains infective for 14 days as the average virus shedding time period across the world is up to 20 days. Unless you test, you will not know if the person is still infectious or not," says Amol Annadate, a pediatrician and activist in the area of public health.

It's not just the period of infection, but the aspect of home isolation is also questionable, feels Anant Bhan, researcher of global health and bioethics. "Not everyone will be able to carry out home isolation effectively. People will become complacent, and it will be extremely challenging for those who live in slums and places with high population densities, to follow the rules of home isolation."

Dr Gunjan Chanchalani, chief intensivist at Bhatia hospital, says these are balanced guidelines as the authorities are trying to find a balance between the available resources and number of patients. “Usually patients of COVID-19 start worsening from the seventh or eighth day and usually worsen till the ninth day. Beyond that, they don't worsen. Given that the guideline says that if they are okay till the tenth day, they can be safely discharged. If they turn positive that time, they can go home and isolate themselves there. We have seen in our own centres that till the time when the numbers were not very high and beds were not so scarce as now, we had found that patients not turning negative even for three weeks. So we as doctors weren't doing anything but to wait for their reports to turn negative. Now in our hospital, on an average, we refuse 10-12 patients who are actually symptomatic and need hospital care. So with these guidelines, I will be able to take care of those patients who will need hospital care."