India has the highest burden of tuberculosis patients in the world 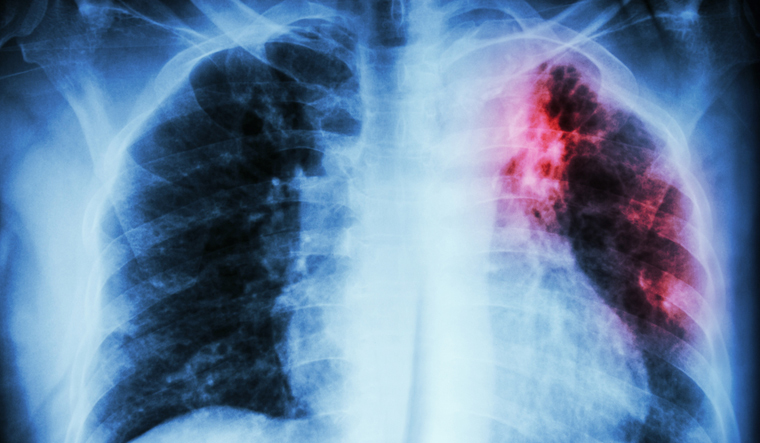 For a country that is targeting elimination of tuberculosis in the next five years, India still has three lakh "missing" TB patients, according to government data. Estimates by the WHO suggest that there were 29 lakh TB patients in the country in 2017, but health ministry officials say only 18.5 lakh cases were detected, leading to a gap of about 10 lakh patients.

However, the estimates now stand at 26 lakh, and only 23 lakh cases have been reported to the government, bringing the number of "missing" patients to around 3 lakh. "There could be several reasons for these cases not being reported," said Vikas Sheel, joint secretary, Union health ministry. "Either the treatment was not successful, or completed, or they went to the informal sector (quacks). However, the disease estimates are coming down, and reporting of the cases is rising," Sheel told THE WEEK.

In terms of absolute numbers, India has the highest burden of tuberculosis patients in the world. Currently, the ICMR is working on the world's largest TB prevalence survey, which will give the exact numbers in every state.

To increase reporting of the TB cases, the government is banking heavily on the private cases using a "carrot and stick" policy. Though TB is a notifiable disease and private practitioners can be jailed for not reporting the cases to the government, health ministry officials said the government was keen on incentivising the private sector rather than penalising them. "An incentive of Rs 500 will be given to a informant who reports a confirmed TB case, and a person who supports the treatment will get Rs 1,000 on completion of the patient's treatment," Dr K.S. Sachdeva, deputy director general, central TB division, said. Notification from private sector had gone up by 22 per cent in 2019; 6.6 lakh cases had been reported in 2019. Sachdeva said the treatment success rate in private sector was 65 per cent in 2018, up from 38 per cent in 2017.

To ensure adherence to the TB drug regimen, the government is using the 99 DOTS system, where patients make a call each time they take their medication, so that providers can monitor adherence records. The number is printed on the wrapper of the drug, and each time a patient forgets to make that call, the system generates a call to remind them.

Several states have committed to ending TB (reducing cases by 80 per cent) before the 2025 target—Kerala by 2020, Himachal Pradesh by 2021, Sikkim and Lakshwadeep by 2022, and Chattisgrah, Jammu, Madhya Pradesh, Tamil Nadu, Bihar and Jharkhand by 2025.

Health ministry officials said the states and districts would be incentivised with rewards ranging from Rs 25 lakhs-1 crore for attaining "TB-free status".