Inside Edge, Money Heist, Lost in Space, Cobalt Blue: What to watch on OTT platforms this week 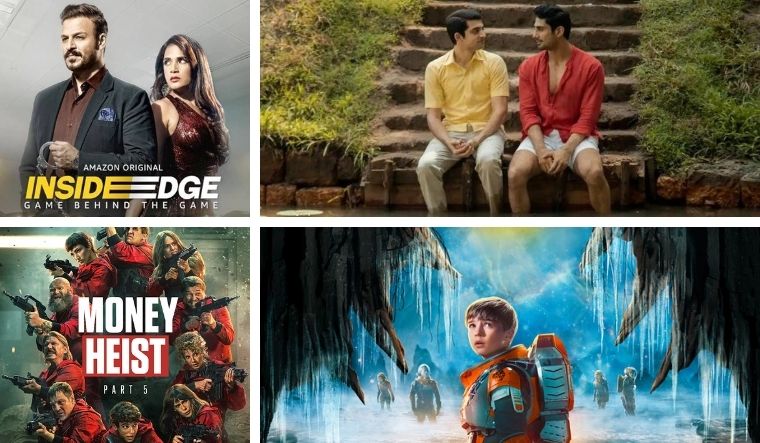 The last month of the year is here, and it is packed with major releases. While quite a few big-budget movies are lined up for the theatres this month, streaming platforms, too, have interesting content to offer. This includes the highly-anticipated part 2 of Season 5 of Netflix's Money Heist this week.

Lost in Space also wraps up in December with its third and final season. The series follows the Robinson family as they fight against all odds to survive after crash-landing on an alien planet. But they're surrounded by hidden dangers. The popular show is based on a 1965’s live-action series of the same name.

The Power of the Dog: Netflix

A domineering but charismatic rancher wages a war of intimidation on his brother's new wife and her teen son — until long-hidden secrets come to light, reads the film's official description. The film is written and directed by Jane Campion, based on the 1967 novel of the same name by Thomas Savage. It stars Benedict Cumberbatch, Kirsten Dunst, Jesse Plemons, and Kodi Smit-McPhee.

Directed by Kanishk Varma, the new season will see series regulars Richa Chadha, Vivek Oberoi, Tanuj Virwani, Aamir Bashir, Sayani Gupta, Sapna Pabbi, and Amit Sial reprise their role. The third season of the much-loved promises yet another peek into the mind games and scandals behind the game of cricket. While season one focused on fixing and betting, season two revolved around doping in sports.

The second part of the hit series' final season will focus on the 'emotional situation' of the characters, creator Alex Pina had said. In the final season, the gang has been shut in the Bank of Spain for over 100 hours. They have managed to rescue Lisbon, played by Itziar Ituno, but their darkest moment is upon them after losing one of their own.

"The Professor (Alvaro Morte) has been captured by Sierra (Najwa Nimri) and, for the first time, doesn't have an escape plan. Just when it seems like nothing else could go wrong, an enemy comes on the scene that is much more powerful than any they've faced: the army. The end of the greatest heist in history is approaching, and what began as a robbery will turn into a war," reads the official description of the last chapter.

The Abhishek Bachchan-starrer delves into the origins of Bob Biswas, the breakout character in Sujoy Ghosh's 2012 thriller Kahaani. Biswas was an LIC agent who moonlighted as a cold-blooded contract killer.

Bob Biswas, set against the backdrop of a love story, showcases the dual life led by the titular contract killer, played by Bachchan. The film, which was shot in Kolkata, also stars Chitrangda Singh.

Starring Prateik Babbar, the film is set in the early 90s and explores the various shades of a relationship and love, Netflix said in a statement. It follows an unconventional narrative based on a best-selling novel of the same name, the film reels off the story of a brother and sister who fall in love with the same man and how their family is shattered by the ensuing events, the official logline read. Cobalt Blue is directed and written by award-winning director Sachin Kundalkar.