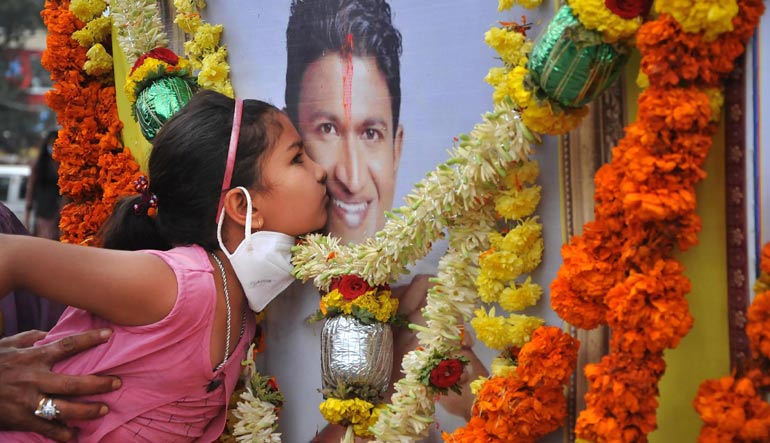 Chorus demanding 'Padma Shri' award posthumously to Kannada film star Puneeth Rajkumar, who died recently, seems to be growing, as two ministers of the Karnataka government, on Sunday, urged Chief Minister Basavaraj Bommai to make a recommendation to the Centre in this connection.

Considered the Kannada cinema's reigning star, Puneeth, youngest of five children of thespian and matinee idol Dr Rajkumar, had died of a cardiac arrest on October 29 at the age of 46.

Agriculture Minister B.C. Patil said, Puneeth should have been given Padma Shri when he was alive for his achievements, but unfortunately as he is no longer with us physically, it has to be given to him posthumously .

"As a fan, I too join other fans (in their demand). Being part of the government, I urge the chief minister to recommend the same to the Centre. Puneeth is qualified for it not only as an actor, but also for his service to the society," the actor-turned- politician said, adding that if the matter comes before the cabinet it will get unanimous consent.

Minister for Tourism Anand Singh too in Haveri said, "Puneeth is a person who had a mentality to serve mankind, he had joined us in several campaigns of public good like pulse polio campaign, when I was into social service... I extend my support to the demand seeking Padma Shri to him."

Kannada actor Prem too wished that Puneeth be given the Padma Shri award at the earliest.

"The love and affection power star Puneeth Rajkumar has gained is bigger than any title or award. I urge the Prime Minister of India to award Padma Shri posthumously to Puneeth Rajkumar. His acting and  contribution to society deserves even more accolades," he had tweeted.

Recently, CM Bommai, responding to a question by the media on such a demand, said, "There are rules on when and people from which sectors should be recommended for Padma awards, it will be in a way unanimous recommendation for Puneeth Rajkumar.  As a government considering everything, we will take a decision."

He said the entire state and the government has love and respect for Puneeth.

Padma Shri is one of the highest civilian honours of India announced annually on the eve of Republic Day, for distinguished service.

Puneeth, popularly known as 'Appu' and 'power star', by his fans, made debut on screen when he was just six-months-old and went on to win a national award as a child artist for the film Bettada Hoovu. He then re-emerge as a lead actor in 2002 and went on to star in 29 films, delivering some big hits.