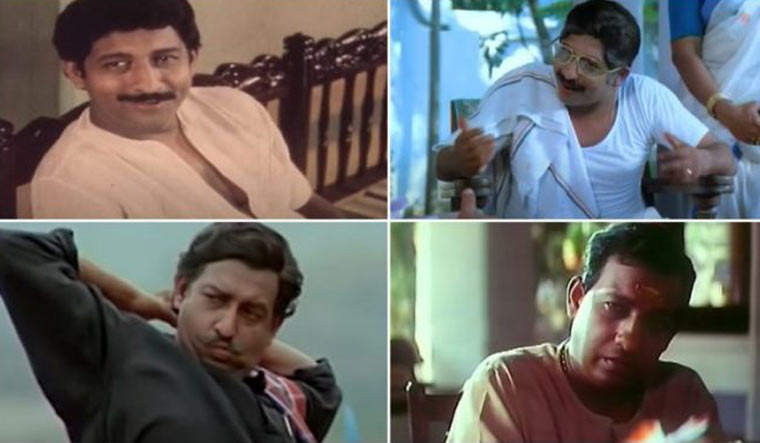 When Kumbalangi Nights—about the relationship of four brothers—released in 2019, there was a lot of talk about how it heralded the return of the ‘slice of life’ cinema in Malayalam. Though the film has been lauded for its ‘simplicity’, there is a kind of sophistication in its simplicity. The viewer realises that a lot of effort has gone in to make it look effortless. Not so, the films of the 1990s, which might arguably be called the golden age of Malayalam cinema. There was an unforced quality to them—as though the actors were living the plot and not just acting it out. Even the humour, though simple, was never simplistic.

Nedumudi Venu epitomised that era. Only in retrospect can one fully realise how invaluable he was in films like His Highness Abdullah, Devasuram, Bharatham, Manichitrathazhu, Thenmavin Kombathu and Chithram. He blended so seamlessly into his characters that it was easy to overlook his genius. In his tribute to Venu, filmmaker Priyadarshan recalled how music composer Illayaraja was not able to make out whether Venu was actually a mridangist or not in Chithram. Who can forget that iconic scene in the film when he and Mohanlal pull off a near-perfect execution of the song, ‘Nagumo’?

But, for me, it is another much overlooked scene that stands out in the film. Venu and Ranjini decide to test whether Mohanlal’s love for her is authentic or whether he is in the game purely for the money, which he has been promised for pretending to be Ranjini’s husband to hoodwink her father. When he does not get his daily fees, Mohanlal threatens to leave. Venu does nothing to stop him and Mohanlal is livid. Finally, seeing that Venu is not going to budge, Mohanlal agrees to settle for a lesser amount. There is absolute indifference on Venu’s face, as he leisurely stretches out on the sofa and refuses him the money. As Mohanlal lets out a string of curses, Venu looks almost bored. Finally, Mohanlal storms out of the room, while a distraught Ranjini rushes out to call him back. When he returns, there is a sly look of understanding on Venu’s face complementing the sheepishness on Mohanlal’s—pure genius. By this point, you are doubled up with laughter. And the truth is, you don’t even know why the scene is so funny. If someone were to ask you, your face would be as blank as Venu’s was when he denied Mohanlal his fees. The best of Malayalam cinema's humour can never be explained, it has to be experienced.

There are many other unforgettable scenes that are seared into a Malayali’s memory—the look of shame on Venu’s face in Devasuram when Revathi rushes in to see him dancing half-naked among a group of rowdies. Or the shy romantic overtures he makes to Shobana inside a bullock cart in Thenmavin Kombathu. His envy in Bharatham, grief in Chandralekha, fear in Manichitrathazu. He was the quintessential chameleon who could transform himself into whatever form the role required of him.

Venu belonged to an ilk of actors that includes the likes of Thilakan, Jagathy Sreekumar and KPAC Lalitha, who never forced their way into fame. They were content to play the sidekicks, the parents and the friends of the star. But there is a saying that you cannot keep a lamp hidden under a bowl. Venu brought a luminosity to his roles that could not stay concealed. For more than two decades, Malayalam cinema basked in that reflected glory. Even now, as a new crop of actors take over, Venu’s light still shines.