OPINION: Aryan Khan will tell you who you are 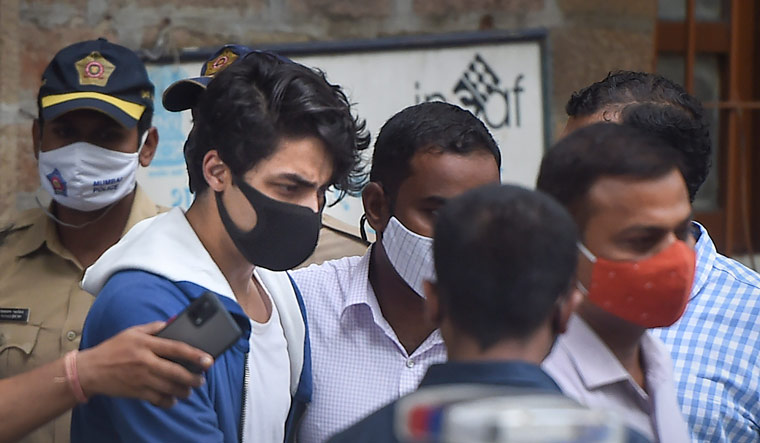 Bollywood actor Shah Rukh Khan's son Aryan Khan being taken to Arthur Road jail from Narcotics Control Bureau (NCB) office after being arrested in connection with the alleged seizure of banned drugs from a cruise ship, in Mumbai | PTI

There are many ways in which you can tell a person’s character. The way they walk, their handshake, their table manners …. But now, there’s a quicker, smarter, way. It doesn’t involve any of your personal habits, it involves Aryan Khan. Find out the person you really are by matching your reactions to the ones below:

If your first reaction to the news that a superstar’s son has been held in the drug bust in a cruise ship was an overflow of sympathy, your moral compass is set just right. It’s the parent in you who comes up on top, and all your paternal/maternal hormones have no doubt influenced your response. You will say things like: “That poor boy is only 23”, and “I pity the parents.” Suzanne Khan, former wife of Hrithik Roshan, had said “Aryan was in the wrong place at the wrong time.” If you have been echoing equally profound sentiments, you’ve got your heart in the right place. About the head being screwed on right, well, that’s a different matter.

Most of us have a complex relationship with our film stars. Calling it ‘love-hate’ would be like calling Covid a ‘common cold’; it’s more like ‘infatuation-abhorrence’. We watch all their films, we hum their songs and we mimic their style. But simmering inches below the surface is a toxic cocktail. When the stars slip up, the knives will be out, and we are ready to rip. Our reactions range from: “Serves them right. These stars and their brats think they can get away with anything!” I have also heard the ruthless: “Let him spend the rest of his life inside Arthur Road Jail.” If you have been experiencing such spasms of righteous indignation, you were probably Prefect in your school, and should now take a shot at becoming society’s monitor.

Patriots to the Fore

Those who love their country to distraction have never quite approved of Bollywood. They liked it when Manoj Kumar sang ‘Mere desh ki dharti’, and they may applaud when a war movie shows Indian forces decimating the enemy. But those are exceptions. The rule is that patriots dislike Bollywood for three reasons – its money, its morals and its leading men. So, when a drug bust happens, people are quick to make disparaging comparisons. When international action star Jackie Chan’s son was caught doing the same thing that Aryan Khan is accused of now, Chan is reported to have said: “This is my failure as a father. I will not interfere.” If you have been asking why Shahrukh couldn’t come up with something similar, the country should be proud of you.

There are some whose world is so full of opera, ballet and tragedies by Sophocles, that they may have only a vague idea about Shahrukh Khan. “Was he the one who ran over pavement dwellers in Bandra?” And they would almost certainly never have heard of young Aryan. They will then wonder what all this fuss is about, after all drug busts are common. If you are part of such a group, you shouldn’t step out of your cocoon. You can save yourself a lot of heartburn and distress. Back to your Bolshoi Ballet, sir.

There is a finger-wagging brigade in television studios which is adept at turning things around until suddenly we the spectators find ourselves in the firing line. So, it is not so much Aryan’s fault or the fault of the zealous Narcotics Control Bureau or even of the media. It’s actually the fault, they say, of all those who have turned a sensitive issue into a public spectacle. They have also psycho-analysed us expertly. “Oh, you just pretend to be disgusted about drugs, but you are secretly enjoying yourself watching the stars and their families suffer. It’s just another form of porn.” I asked myself if all this was true, and perhaps they were right. Shame on me!

For the conspiracy theorists, there is more to all this than meets the eye. According to them, the whole case was never about a few grams of cocaine seized from rich young kids on a cruise. Rather, it was a diversionary tactic to cover up for something much bigger. Everybody now is so busy talking about glamour and glitz that nobody can be bothered about the nearly 3000 kg of heroin seized in a boring little port in Gujarat. Brilliant, isn’t it?

If you’ve read all this, you will know that expressing your opinion about the Aryan Khan case will reveal your character and tell the world where you stand on sensitive issues. That’s why there are people who will wait and watch and then decide not to have an opinion one way or the other. In these tricky times, that must be the sanest way to go.