Truth shall prevail: Rhea Chakraborty on allegations of Sushant's family 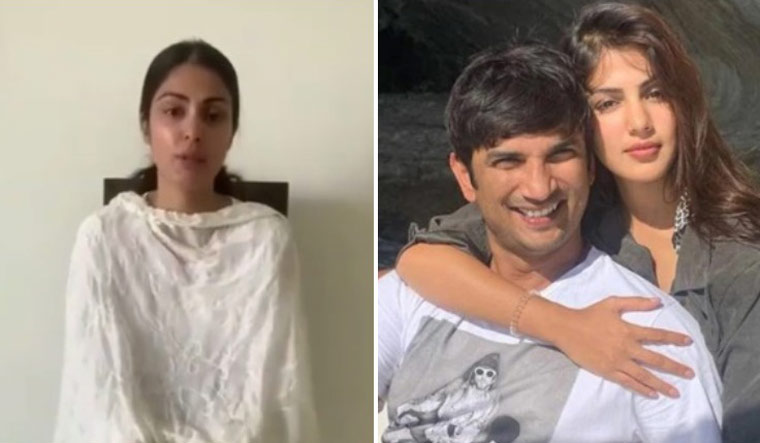 Rhea Chakraborty in a screen grab from the video; with Sushant

Actor Rhea Chakraborty, who has been accused by Sushant Singh Rajput's family of abetting the actor's suicide, has broken her silence in the case, claiming "the truth shall prevail".

Rajput, who was dating Chakraborty, was found dead at his Bandra residence on June 14.

Over a month after the 34-year-old actor's death, his father lodged a police complaint in Patna on Tuesday against Chakraborty.

In a video statement released through her lawyers, Chakraborty said she had faith in the judiciary.

"I have immense faith in god and the judiciary. I believe that I will get justice. Even though a lot of horrible things are being said about me on the electronic media, I refrain from commenting on the advice of my lawyers as the matter is sub-judice. Satyamev Jayate, the truth shall prevail,” the actor said.

In his complaint, Rajput's father Krishna Kumar Singh, also sought to invoke the provisions of the Mental Health Care Act, alleging that the "machinations" of Rhea and her family members had caused his son to crack up, despite a successful career in films, and ultimately drove him to suicide.

Singh has accused Chakraborty of having befriended his son in May, 2019 with the intention of furthering her own career.

On July 16, Chakraborty had requested Union Home Minister Amit Shah to order a CBI inquiry to understand what "pressures" prompted Sushant to take the extreme step of suicide.

Addressing herself as Rajput's "girlfriend" for the first time in public, Chakraborty said though she has "complete faith" in the government, a CBI inquiry would help bring justice to the case.

"Respected @AmitShah sir, I'm Sushant Singh Rajput's girlfriend Rhea Chakraborty. It is now over a month since his sudden demise. I have complete faith in the government, however in the interest of justice, I request you with folded hands to initiate a CBI enquiry into this matter," the 28-year-old actor wrote on Instagram alongside Rajput''s photo.

"I only want to understand what pressures prompted Sushant to take this step. Yours sincerely, Rhea Chakraborty. #satyamevajayate," she added.