By turning their posts black, brands and celebrities inadvertently block out protest 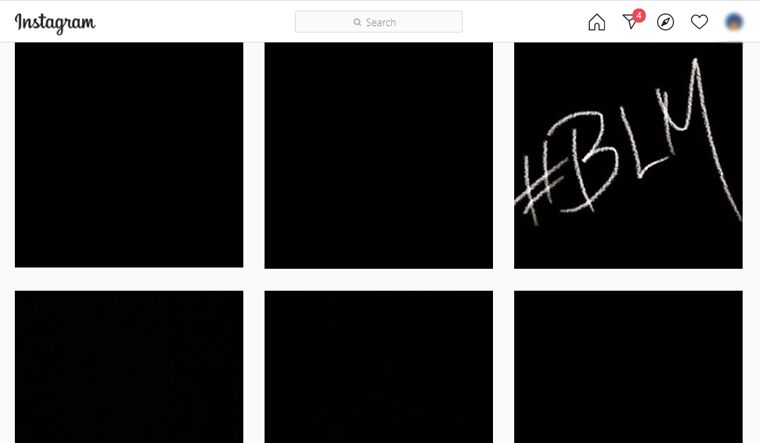 Social media was flooded by a wall of black posts on Tuesday, as artists, companies and celebrities posted in support of #BlackoutTuesday and #BlackLivesMatter | Screenshot of the Instagram search result for #BlackLivesMatter

Until Tuesday, the hashtag #BlackLivesMatter yielded first-hand updates from protests across the United States and the world. But, on Tuesday, an attempt by multiple brands and celebrities to mark support for the campaign ended up inadvertently blocking out such posts with a flood of black-box posts.

“this is not helping us. bro who the hell thought of this?? ppl need to see what’s going on,” tweeted rapper Lil Nas X, sharing a screenshot of an Instagram feed dominated by black squares for the hashtag #BlackLivesMatter. "not tryna be announcing but what if we posted donation and petitions links on instagram all at the same time instead of pitch black images," he added.

this is not helping us. bro who the hell thought of this?? ppl need to see what’s going on https://t.co/fN492qsxaa

The idea for #BlackoutTuesday was that prominent artists and creators would put their content on hold for a day to mark their supportfor the ongoing protests against police brutality and racial inequality in America, sparked by the death of George Floyd at the hands of an officer from the Minneapolis Police Department last week. The idea originated from African-American music industry executives Brianna Agyemang and Jamila Thomas, who also coined the hashtag #TheShowMustBePaused. On Instagram, many supported the hashtag by making a blank, black post with no text.

With over 7.2 million posts, #BlackoutTuesday was among the top trending posts on Instagram. However, as many handles tagged #BlackLivesMatters as well, the result was that protesters using the hashtag was washed out on the platform by a wall of black squares.

Celebrities like Adele, Kylie Jenner, Katy Perry, Bryan Cranston and Kevin Hart—among many others—all shared completely black posts, some with and without the hashtag #BlackLivesMatter.

While well-intentioned, the move has led to social media feeds being flooded. Representative Alexandra Ocasio-Cortez was among those who pointed out the issue, posting on Instagram. “PLEASE in your black pics do not use the hashtag # blm, black lives matter, etc when you post. If you have it there, please remove it. Those hashtags are how people can see protest footage and share information on protests. Using these hashtags on blackout posts erases key information from prominent search and makes important footage very hard to find and share.

KEEP POSTING if you are at a protest amplifying info, advocacy, footage, etc.”

She added that if you want to use a blackout hashtag, use #blackoutday2020, #Blackout, or #blackoutday.

A few other celebrities, like Kumail Nanjiani, also urged people against obscuring the BLM movement.

Many brands participated in the campaign too. Some found a way to do so without posting the hashtag: Spotify announced it would be adding an 8-minute, 46-second track filled with silence onto select playlists and podcasts—highlighting the exact amount of time that officer Derek Chauvin pressed his knee against Floyd’s neck while holding him down to the ground, the act many believed was responsible for killing Floyd.

Apple Music also posted about it, hashtagging #TheShowMustBePaused and using their platform to highlight black artists. YouTube Music and Amazon Music have also expressed support. Several Hollywood figures have also come out in support, including Disney and Netflix.

The move comes as US President Donald Trump said he had authorised the deployment of “thousands and thousands” of heavily armed soldiers and police to quell the protests in Washington. On Sunday, Trump was reportedly moved to a bunker underneath the White House as protesters swelled in front of the historic building.

Trump attracted even greater controversy on Saturday after he delivered a statement while holding a Bible in front of the St John's Episcopal Church—an act that was preceded by police clearing bystanders from the area with tear gas.

The European Union’s foreign policy chief Josep Borrell told reporters that the EU was “shocked and appalled” by George Floyd’s death and called it an “abuse of power”, urging against the use of excessive force to deal with the protests.