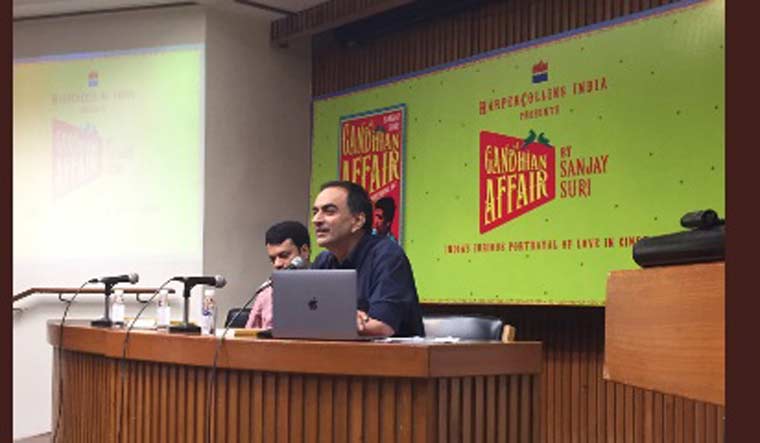 London-based writer and journalist Sanjay Suri at the launch of his book 'A Gandhian Affair: India's Curious Portrayal of Love in Cinema' | via Twitter/HarperCollins India

Ever wondered why the hero in Indian films until the 1980s was usually poor-to-middle class, shunned sexual temptation, held high the torch of socialism and was almost always cast in the mould of Mahatma Gandhi—albeit a better looking one?

That's because Gandhi and his ideals of austerity, social justice and non-violence heavily influenced producers of post-Independence India for decades _ and found a willing audience _ until economic liberalisation slowly changed the society as well as the movies, according to London-based writer and journalist Sanjay Suri. Very often the hero of Indian cinema—be it Raj Kapoor, Shammi Kapoor, Dev Anand or Manoj Kumar—was inspired by the Father of the Nation, fighting temptation of the flesh offered by the leading lady (Shammi Kapoor starrer Rajkumar, 1964) and taking up cudgels against rich industrialists to show that capitalism was a crime (Dilip Kumar's Naya Daur, 1957).

Suri lays out his postulate in his new book, A Gandhian Affair: India's Curious Portrayal of Love in Cinema, in which he concedes that the Indian hero did let his guard down as far as sexual temptation was concerned in songs but rarely in the plot line.

"The hero must mandatorily be shown to face wealth to then turn away from it. He must be shown to face sexual possibilities to then turn away from these two. In this double about-turn lies his heroism," the London-based Suri said at the launch of his book in New Delhi on Sunday evening. "This is a heroism of surrender, not of conquest, unless it is a conquest of worldly desires. It is in this twin retreat - from both sex and wealth - that lies the uniqueness of the cinema of this period in relation to any other," he added.

Producers found a way to give vent to the male sexual desires in one formula film after another— always through song. The author cited as examples 'Kaan mein jhumka...' (Saawan Bhadon) and 'Aasmaan se aaya farishta' (An Evening in Paris) and also played a clip from Rajkumar, showing Shammi Kapoor resisting the charms of Sadhana in dialogues but succumbing and leading her into a cave with a suggestive twitch of the head, in a song (Dilruba Dil Pe Tu). "It is the love story within which the sacrifices come but the love will spill itself into sexual desire as it will. It needs to find expression. This it does through the song. The hero sacrifices in the story and desires in song. The pattern is as simple as it is constant," Suri said.

Using the examples of films down the decades, from Pyaasa and Guide to Dilwale Dulhania Le Jaayenge and Lage Raho Munna Bhai, Suri discusses how cinema was bound by strict moral do's and don'ts. "He makes choices inevitably that are one with the kind of morals over sex and money most associated with Gandhi. It is those choices the hero is scripted to make at pivotal moments which turn the plot that then gives this cinema the stuff of sameness we see. It becomes in scripted character for all heroes to act in line with Gandhian morals," Suri

writes in the book, which is published by HarperCollins India.

However, the villain was the embodiment of all vice - sex and wealth. The debonair Rehman and suave K N Singh are a few cases in point. "The principle is clear: if you wanted sex, you were bad; if you were doing it, you were immoral; if you'd done it, you were guilty," the book reads.

But reality was far from what was being shown in the cinema. Out on the street, the pursuit of sex and money seem to drive most of the men most of the time, the author said.