The former Doordarshan news anchor is expected to be evicted tonight 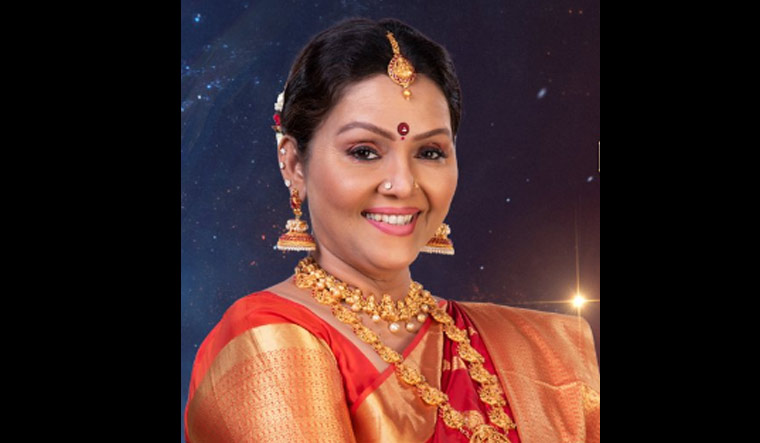 The veteran newsreader from Doordarshan has most likely ended her stint at the Bigg Boss House. Fathima Babu has emerged at the bottom of opinion polls trying to pick the candidate most likely to be evicted.

Her departure is speculated be announced during the telecast of Bigg Boss Tamil 3 tonight at 8pm. It will mark the first time a candidate is made to leave the house in this season. Behind Talkies conducted an opinion poll among its viewers, which resulted in Fathima receiving the lowest votes.

The first week saw Fathima, Meera Mithun, Saravanan, Cheran, Madhumitha, Sakshi Agarwal and Kavin nominated to leave. Fathima was among the less controversial candidates in the first week, with Madhumitha then being relieved by the audience who voted to have her remain.

Fathima’s problem may well have been her uncontroversial nature. While contestants like Madhumitha and Lovliya already have large fan followings calling themselves ‘armies’ online, Fathima has found little support on Twitter. In fact, some fans voted against Fathima tactically, as part of a larger manoeuvre to have Sakshi eliminated.

Vote for Fathima Babu, in order to eliminated Sakshi... Place all your 50 votes to Fathima Babu. Madhu has been already saved. Now we have to vote for FB. ONLY 1 DAY LEFT.#BiggBossTamil#BiggBossTamil3

However, a few did feel bad for Fathima.

Vote for Fathima Babu, in order to eliminated Sakshi... Place all your 50 votes to Fathima Babu. Madhu has been already saved. Now we have to vote for FB. ONLY 1 DAY LEFT.#BiggBossTamil#BiggBossTamil3

The voting process for this year’s Bigg Boss nominations involves either logging into the Hostar app on iOS/Android, or giving a missed call to the required number. As there are many Tamil Bigg Boss fans in Malaysia, notwithstanding the fact that Mugen Rao is a Malaysian-Indian candidate with a large following in Malaysia, this has led to some fans being upset over their inability to vote.

Bigg boss vote only in Hotstar and missed calls ? Then how Malaysia, srilanka , Singapore and Europe country people's cast their votes to their favorite.we want google votes 😠 !Then how srilankan & Malaysia people vote to their country candidate. #BiggBossTamil @vijaytelevision

Fathima may not be the only person leaving the house on short notice. Two contestants, Vanitha and Meera Mithun, find themselves under the eye of law enforcement officials. Vanitha is a suspect in a kidnapping case involving her own daughter, who she had lost custody of to her ex-husband. News reports say that the police came and questioned Vanitha at the Bigg Boss house itself.

Meera, in the meantime, is reportedly involved in a case of money laundering.

As police cases are unpredictable, it is not known how they will balance their legal obligations with their Bigg Boss obligations. News reports are therefore claiming that either of two could face arrest at any moment.

While Fathima would already have left the house on the evening of July 6, it will only be telecast the next day. To watch Bigg Boss Tamil 3, you can stream it on Hotstar or catch it live at Vijay TV at 8pm.