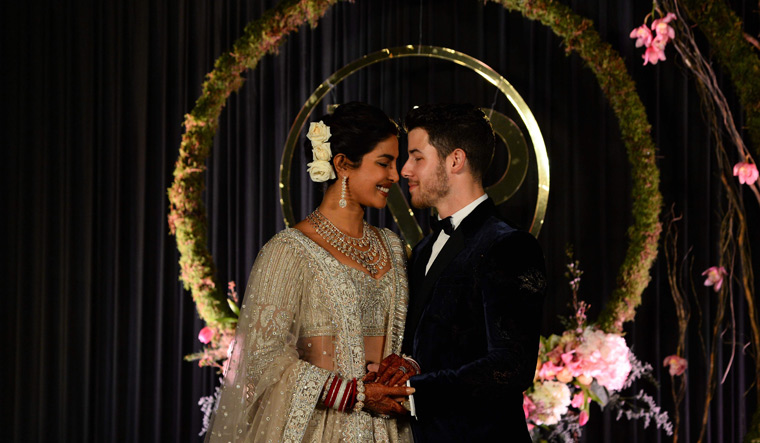 Bollywood actress Priyanka Chopra and US musician Nick Jonas, who were recently married, pose for a photograph during a reception in New Delhi | AFP

Joe Jonas and his fiance Sophie Turner have slammed an article for calling Priyanka Chopra a "modern-day scam artist" over her marriage to his brother, American singer Nick Jonas.

The article, published on The Cut website and written by journalist Mariah Smith, claimed that Nick shares a "fraudulent relationship against his will". The piece is full of racist, first world complex and misogynist undertones.

One of the portions of the article read, "All Nick wanted was a possible fling with Hollywood’s latest It Woman, but instead he wound up staring straight at a life sentence with a global scam artist." "Even more upsetting, she's a scam artist who never even took the time to make sure he was comfortable riding a horse before arranging for him to enter their wedding ceremony on horseback," Smith wrote.

The article was slammed online by many people, including Joe and Sophie. After the furore, the website issued an apology and said it has deleted the objectionable article. "An earlier story about Priyanka Chopra and Nick Jonas did not meet our standards. We've removed it and apologize," The Cut wrote on its official Twitter handle.

The website had earlier updated the article, removing all the objectionable mentions to Priyanka. Turner, who is engaged to Joe, slammed the article on Twitter, calling it "wildly inappropriate". "This is wildly inappropriate and totally disgusting. Very disappointed that The Cut would give anyone a platform to spew such bullshit," she said.

Joe wrote, "This is disgusting. @TheCut should be ashamed to have someone write such evil words. What Nick & Pri have is Beautiful Love. Thank u, Next."

Actor Sonam Kapoor also came out in defence of Priyanka and termed the article as "sexist, racist and disgusting". "For a publication that 'shows women’s what they are made of' @TheCut has a lot to answer for. The article on @priyankachopra was sexist, racist and disgusting. Also it’s written by a woman which is so sad. It reeks of envy and bitterness. @mRiah shame on you!" she wrote.

Singer Sona Mohapatra tweeted, "Deeply disgusting. To character assassinate a hardworking, driven, achiever like Priyanka Chopra in this warped,petty manner & for @TheCut to publish such a low-brow piece is the lowest of the lows. 'Priyanka’s plan to make this Nick Jonas opportunity her forever b*h' ?!!? Sick."

Actor Swara Bhasker said, "Depressed with the state of the world and current affairs? Here is some good old fashioned puerile filth published by TheCut to add some pointless venom to your day. Also someone invite Mariah to an Indian wedding, might assuage some of her misguided angst! Yellow Journalism."