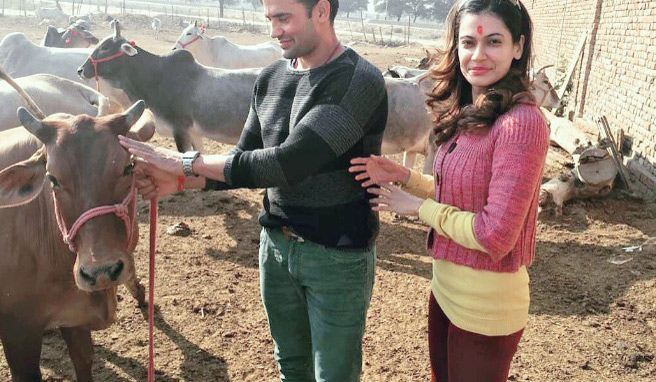 Flood-ravaged Kerala may be slowly picking up the pieces and trying to rebuild all that is lost. But even amid the struggle, the state is not spared from those who attempt to point a finger at the reason for the deluge. From eating beef, to women moving court to enter the Sabarimala shrine, the reasons keep coming. Now, it is actress Payal Rohatgi who is out with another controversial tweet on the same. Payal, a 2008 Bigg Boss contestant, blames it on cow slaughter in Kerala which hurts the sentiments of Hindus and god.

In a tweet on Monday, Payal, who calls herself a 'proud Hindu', wrote (sic): “#cowslaughter is NOT banned in #kerala. Dear Kerala people and politicians of Kerala, not good to hurt the sentiments of #Hindus. If u openly do that, sorry to sound but God also openly does it.. God is one but u can’t hurt religious faith like this.” The tweet has garnered a lot of traction on social media, and heated exchange of comments between users and Payal. In some of the comments, users question Payal if the same fate will befall Goa, and how would god deal with India, the largest exporter of beef.

“And the reason for Uttarakhand floods is soya chunks. God thought people are eating beef,” tweeted a user. “Please send us a list of food items which won't hurt your sentiments.” Other users commented she was seeking attention as she was out of work.

#cowslaughter is NOT banned in #kerala. Dear Kerala people and politicians of Kerala, not good to hurt the sentiments of #Hindus. If u openly do that, sorry to sound but God also openly does it.. God is one ☝️ but u can’t hurt religious faith like this🙏 pic.twitter.com/eqBwM7F15G

This is not the first time Payal's tweet with a communal angle has shaken up social media. In January 2017, she went on a rant on Twitter and Facebook after two Jet Airways ground staff in Mumbai denied her and husband Sangram Singh permission to board a flight to Thiruvananthapuram. She said they were not allowed to fly despite reaching at 6:20 am for a 6:50 am flight. To make matters worse, she asked if she was subjected to this treatment because she is a Hindu, and the two airline supervisors were Muslims. She got slammed on social media for the rant.

Payal is married to wrestler Sangram Singh. She competed in the Miss India pageant in 2000 and later represented India in Miss Tourism World competition. She was crowned Supermodel Miss Tourism World in the same year. She made her Bollywood debut in Yeh Kya Ho Raha Hai? and acted in films like Plan, Rakht, 36 China Town and Dil Kabaddi.

Payal and Sangram have participated in reality show Bigg Boss but in different seasons.