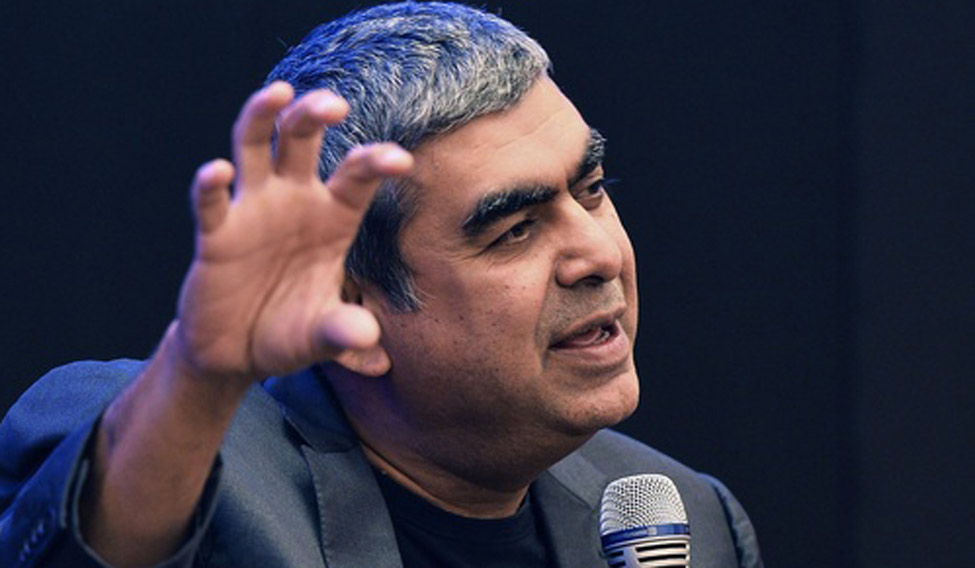 “It is a very sad day” said Vishal Sikka though a video conference call from Palo Alto in the United States while addressing Indian media persons glued to a giant screen at the company's headquarters in Bengaluru. Giving him company was R. Seshasayee, chairman of the Infosys board, who was in the US for some personal work. During the press conference, Sikka openly expressed his dissatisfaction with the repeated allegations which were being levelled against him by Infosys founder N.R. Narayana Murthy. He said he was in a difficult situation due to the continuous allegations and added that he realised that it was taking a heavy toll on the organisation and on him personally.

“Business continues as usual and I have no future plans as of now,” Sikka said. Seshasayee, meanwhile, lauded the role Sikka had played in the company and how he had guided the company in challenging times. Interestingly, during the press meet, the company's independent director and co-chairman Ravi Venkatesan denied the he was in contention for the CEO's post.

It was truly a day of high drama at the Indian IT services major Infosys after Sikka decided to resign as its CEO. Many experts were taken by surprise as nobody thought that the decision would come this soon although they were expecting Sikka to quit after the next few quarters. Some of the experts had in fact told THE WEEK earlier that Sikka was in a shaky position.

Many experts, however, point out that the Infosys board could have played a more significant role in striking a balance between Sikka and Murthy and should have tried to broker peace between the two. “Board should have acted strongly and should have tried to have a reconciliation between Sikka and Murthy. However the exit of Sikka will not have an immediate impact on the company though the company stock prices are down and around Rs 30,000 crores was wiped off from the market. I feel the interim person Pravin Rao will be able to manage the operations well and can maintain relations with the existing clients very well,” said Amit Chandra, IT analyst at the Mumbai-based HDFC Securities.

Experts such as Kris Lakshmikanth, founder of the recruiting firm Head Hunters India Limited, felt that post the resignation of Sikka, Murthy is being made to look like the villain and Sikka the victim. However, he said nothing will happen to the position of Infosys as it is siting pretty with a huge cash reserve of around $ 5.4 billion. “Though money has been wiped off from the market, the stock price will once again rise soon. If a company has such a huge cash reserve, nothing will happen to the company and the exit of Sikka will only have a short term impact on the company. However, one thing is clear that Murthy, by leveling continuous allegations, has become cranky and should not time and again keep on raising allegations. I feel that financial investors will be on the side of the Infosys board and will not side with Murthy as such kind of allegations and exits will keep tumbling the stock prices of Infosys shares,” Lakshmikanth told THE WEEK.

He further said Infosys needs a person who has been actively involved in the North American market and is based in the US “Even bringing back Dadlani as the next CEO of the company can be a good idea as he had tremendous exposure to the US market and had been with the company for many years. However, the new CEO will come up with a set of demands as they will be scared to step into Sikka's shoes given the allegations which are raised on behalf of Murthy and other Infosys founders,” Lakshmikanth said.

Some experts such as Alok Shende of the Mumbai-based Ascentius Consulting felt that Infosys board and Sikka should have answered each and every query from Murthy and should have made the third party report public. “If there was nothing to hide and Infosys was given a clean chit, why not make the report public. As a CEO, Sikka should have negotiated hard for the deal and the most fishy part about the board's approval is the high severance package to the former CFO Rajiv Bansal. I feel that the Infosys board needs to be reconsitituted with fresh board members with a different perspective. Another challenge is that many senior people, who could have been a potential successor to Sikka, had quit the company during Sikka's tenure. Dadlani is one such person who recently left. When pressure came on Sikka to perform he tried to put pressure on some other senior people at Infosys and in the due course, they quit,” said Shende.

Some other experts such as V.K. Sharma, head, PCG, HDFC securities said, “Sikka’s exit draws a long drawn out board room battle to a close. While the company did better than the industry during Sikka’s tenure, it was nowhere near achieving Sikka’s own $ 20 bn target by 2020. The forthcoming buy back may belay the stock from falling more. Sikka’s allegation that he was continuously being distracted does not wash as he had long enough a honeymoon period to make his mark.”

Expressing concern over Infosys investors losing Rs 30,000 crore, Sanjay Padode, secretary, Centre for Developmental Education, IFIM Institutions, said, “Vishal Sikka was a cultural misfit for Infosys. Infosys was a bootstrapped organisation that was built diligently by the promoter's conviction in good governance, frugal innovation and quality delivery. Vishal’s experience was largely in the area of technological innovation and driving business through strategic interventions. The failure was evident because of the old adage of Peter Drucker 'Culture eats strategy for breakfast'”.

Your form could not be submitted.
This browser settings will not support to add bookmarks programmatically. Please press Ctrl+D or change settings to bookmark this page.
Topics : #Infosys