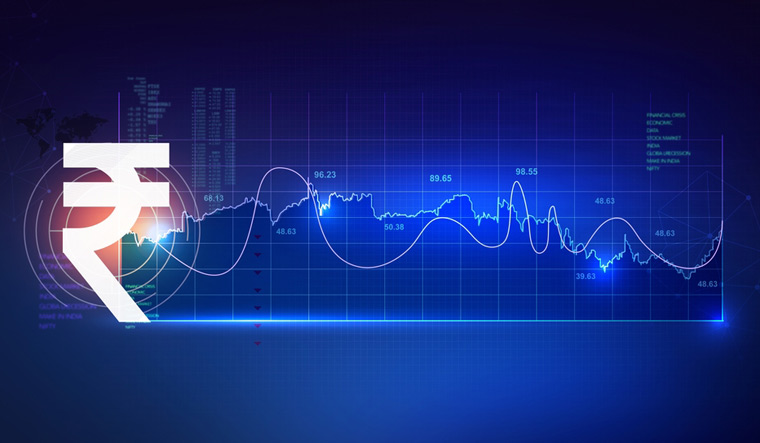 The Indian rupee sliding to a historic low of 81.09 to a dollar will make import of crude oil and other commodities expensive, further fueling inflation which for the past several months has remained above the Reserve Bank's upper tolerance level of 6 per cent.

The pressure on the domestic currency, which is mainly due to repeated hikes in interest rate by the US Fed, is likely to continue with rise in trade deficit and gradual withdrawal of funds by institutional investors.

The Reserve Bank, which is scheduled to announce its bi-monthly monetary policy later this week, is expected to increase the repo-rate or the short-term lending rates by 50 basis points in a bid to tame inflationary pressure.

For a nation that is 85 per cent dependent on imports to meet its oil needs and 50 per cent for gas requirements, a weakening rupee has a bearing on domestic price of fuel.

India's trade deficit more than doubled to $27.98 billion in August due to increased crude oil imports. Import of 'petroleum, crude & products' stood at $17.7 billion in August this year, an annual increase of 87.44 per cent.

India's forex kitty continued its southward journey, with the overall reserves declining by $5.219 billion to $545.652 billion for the week ended September 16. The reserves, which have been dipping as the central bank deploys the kitty to defend the rupee amid pressure caused majorly by global developments, had declined by $2.23 billion to $550.87 billion in the previous week.

SBI in a report said global commodity prices have remained volatile after their fall in June from historical highs. Prices edged up during late July - early August, before moderating towards the end of the month, largely driven by concerns over demand slowdown.

Crude oil prices are trading decisively below USD 100 per barrel with heightened volatility due to expectations of an imminent slowdown in global demand, it said.

Solvent Extractors' Association of India Executive Director B.V. Mehta said the cost of imported edible oils will go up. The country imports about 13 million tonnes of edible oils every year. "Ultimately, this will be passed on to consumers. However, the only silver lining is India's oilseed sector exports...The rupee depreciation will boost export realisation and support export," he said.

As per the SBI report, no central bank can prevent currency depreciation currently and RBI may allow the rupee to depreciate for a limited period. Foreign currency assets of RBI have declined by $75 billion since Ukraine War, in order to protect the rupee, it said and added that this has led to reduced import cover of nine months, which is at the lower end.

"This is also true that once the currency settles at a lower level, appreciation of the currency picks up at a dramatic pace, that is a distinct possibility given India's strong fundamentals," the report said.

Moreover, much of the weakness in rupee is on account of a strong dollar and not because of our domestic economic fundamentals, it said.

Madan Sabnavis, Chief Economist, Bank of Baroda was of the opinion that the RBI's Monetary Policy Committee (MPC) will have a unique issue to debate when it meets next week for the monetary policy.

The recent downhill movement of the rupee following the Fed's announcement has made the rupee one of the more unsatisfactory currencies based on the response to the dollar strengthening in the global market, he said.

"This piece will also be actively discussed in the deliberations, as when deciding on interest rates, the currency part of the story cannot be left out," he said.

"There seems to be no turning back for the dollar as it made a fresh two-decade high and in turn pushed the rupee to a record low level," Parmar added.

The 38th meeting of the Monetary Policy Committee, constituted under the Reserve Bank of India Act, will be held on September 28-30.

The rupee declined by 30 paise to close at a fresh lifetime low of 81.09 against the US dollar on Friday, weighed down by a strong American currency overseas and risk-off sentiment among investors.

At the interbank foreign exchange market, the local currency breached the 81-mark for the first time ever and slumped to 81.23 against the American currency. It finally closed at 81.09.