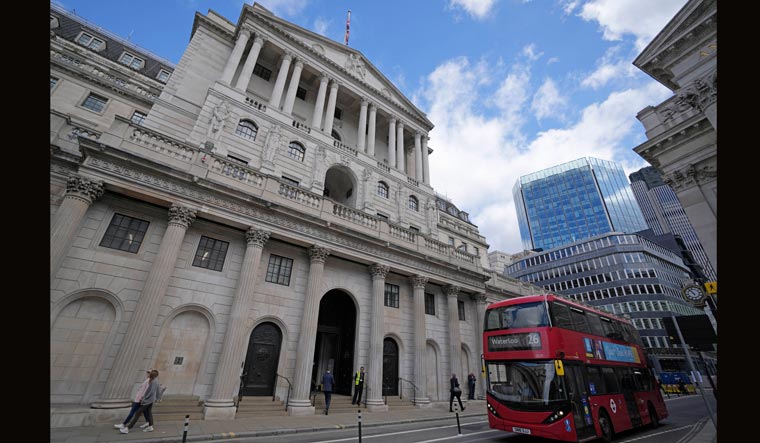 Britain's central bank raised its key interest rate by another half-percentage point Thursday, avoiding more aggressive steps to tame inflation that the US Federal Reserve and other banks have taken.

The Bank of England raised its benchmark rate to 2.25%, matching its half-point increase last month the biggest hike in 27 years. The decision was delayed a week as the United Kingdom mourned Queen Elizabeth II and follows economic relief measures announced by new Prime Minister Liz Truss' government that are expected to ease inflation short term.

It is the bank's seventh straight move to increase borrowing costs as rising food and energy prices fuel a cost-of-living crisis that is considered the worst in a generation. Despite facing a slumping currency, tight labour market and inflation near its highest in four decades, officials decided against acting more boldly as large hikes threaten to tip the economy into recession.

The UK decision comes during a busy week for central bank action. A day earlier, the US Federal Reserve hiked rates by three-quarters of a point for the third consecutive time and forecast that more large increases were ahead.

The meeting will tell us not only how worried policymakers are about the slide in sterling and other UK markets, but also how the government's decision to cap household/business energy prices will translate into monetary policy, said James Smith, developed markets economist with ING bank.

Surging inflation is a worry for the bank because it eats away at consumers' purchasing power. The traditional tool to combat inflation is raising interest rates, which reduces demand and therefore prices, by making it more expensive to borrow money.

Inflation in the United Kingdom is running at 9.9 per cent, close to it's highest level since 1982 and five times higher than the Bank of England's 2 per cent target. The British pound is at its weakest against the dollar in 37 years, contributing to imported inflation.

The central bank warned last month that UK inflation would peak at 13.1 per cent by the end of this year and trigger a prolonged recession.

Since then, Truss' government has unveiled a massive relief programme that caps spiraling energy bills for households and businesses. Economists say the measures mean inflation will peak at a lower level and then fall faster next year.

The Bank of England avoided pressure to go bigger even as other banks around the world take aggressive action against inflation fueled by the global economy's recovery from the Covid-19 pandemic and then Russia's war in Ukraine.

This month, Sweden's central bank raised its key interest rate by a full percentage point, while the European Central Bank delivered its largest-ever rate increase with a three-quarter point hike for the 19 countries that use the euro currency.