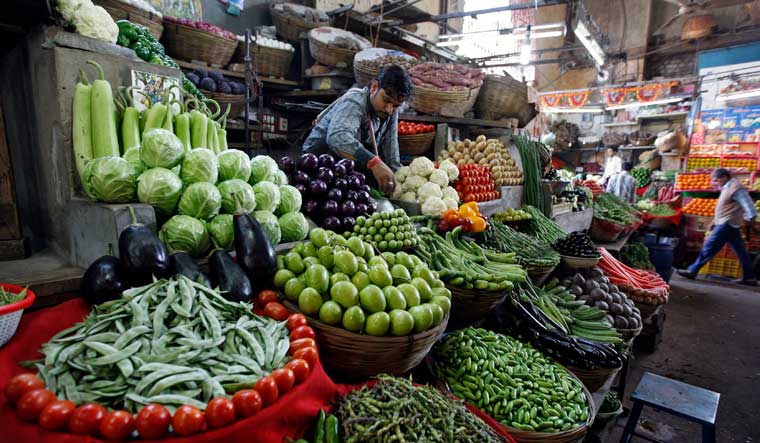 In a double whammy of sorts for the Indian economy, retail inflation accelerated to 7 per cent in August driven by high food and fuel costs, while factory output plunged to a four-month low of 2.4 per cent.

The reversal of a three-month declining trend in CPI inflation will put pressure on the Reserve Bank of India (RBI) to again raise interest rates to tame prices, which have stayed above the comfort zone for the eighth month in a row.

CPI inflation climbed to 7 per cent from 6.71 per cent in July and 5.3 per cent in August 2021, official data released on Monday showed.

A sharp increase in cereals and vegetable prices owing to erratic monsoon impacting production was the main reason.

While the country was already facing double-digit wheat inflation due to unexpected heat wave pulling down the output, a lower area sown under paddy due to the shortfall in monsoon rainfall is expected to reduce the rice output. The twin effect of this means inflation in cereals will remain at elevated levels.

However, the Finance Ministry expressed optimism that export curb imposed by the government on atta, rice, maida, etc will moderate prices of these items.

"Government has prohibited exports of food products like wheat flour/atta, rice, maida, etc to keep domestic supplies steady and curb rise in prices. The impact of these measures is expected to be felt more significantly in the coming weeks and months," a finance ministry tweet said.

Similar measures taken in the past have resulted in price moderation of commodities like edible oil and pulses, the ministry said.

"To soften the prices of edible oils and pulses, tariffs on imported items have been rationalized periodically and stock limits on edible oils have been kept, to avoid hoarding. Inflation in oils and fats &pulses and products have moderated to 5.62% and 2.52% respectively," another tweet said.

This is the second instance since RBI adopted the inflation targeting approach that the retail inflation has breached the upper tolerance limit of 6 per cent for eight consecutive months - the earlier instance was from April 2020 to November 2020.

Separately, the Index of Industrial Production (IIP) for July 2022 recorded a tepid year-on-year growth of 2.4 per cent, falling sharply from 12.7 per cent in June.

The manufacturing sector grew by 3.2 per cent (a four-month low) and the electricity sector by 2.3 per cent (a six-month low). Mining sector witnessed a contraction of 3.3 per cent in July 2022 after a gap of 16 months despite the coal output increasing by 11.4 per cent in the same period.

Rumki Majumdar, economist, at Deloitte India said the CPI and IIP data show just how much work the RBI has to do. "The challenge is that the RBI is faced with a difficult balancing act, needing to raise interest rates aggressively to control inflation without impacting the recovery."

While Icra chief economist Aditi Nayar said the CPI inflation print is expected to rise slightly to 7.1 per cent in September, India Ratings said retail inflation will fall below 6 per cent only by January next year.

"We expect inflation to ease in 2023, with an improved supply side situation and global economic weakening leading to falling energy prices," Deloitte's Majumdar said.

The government has already announced restrictions on the export of wheat flour and more recently for rice which should stem domestic price pressures.

"The outlook continues to be uncertain due to cereal inflation, weakness in the currency, elevated global commodity prices, pick-up in services demand and revision of natural gas prices in 2HFY23 (due in October 2022)," India-Ratings said expecting a 25-50 basis points increase in interest rates at the RBI's monetary policy review due later this month.

On an annual basis, the rate of price rise was in excess of 10 per cent in the case of vegetables, spices, footwear, and 'fuel and light'.

However, there was a contraction in inflation in eggs and almost flat in protein-rich 'meat and fish' in August.

Inflation had touched a high of 7.79 per cent in April before decelerating to 6.71 per cent in July.

The government has tasked RBI to ensure CPI inflation remains at 4 per cent with a margin of 2 per cent on each side.

The RBI Governor-headed Monetary Policy Committee (MPC) is scheduled to be held from September 28 to 30.

The key short-term lending rate (repo) has been raised by 140 basis points in three tranches since May this year. The last two hikes were 50 basis points each.

Former RBI Executive Director and MPC Member Mridul Saggar said inflation is continuing to be higher than comfortable but is expected to trend down from October.

"With some more rate hikes, the problem of negative real deposit rates can be addressed... inflation could trend down from October due to base effects, lagged impact of monetary policy tightening and expected improvement in supply chains," he said.

NSO said the price data were collected from selected 1,114 urban markets and 1,181 villages covering all States/UTs.

Narender Wadhwa, President of the Commodity Participants Associations of India (CPAI), said that retail inflation rising to 7 per cent is worrisome.

"This figure may pressurise RBI to hike rates more aggressively to tame surging prices even at the cost of the economy," he said and added that inflation is a global phenomenon and all countries are grappling with it.

As per the data, the retail inflation in rural and urban India was 7.15 per cent and 6.72 per cent, respectively.

The inflation was above 8 per cent in West Bengal, Gujarat and Telangana.