39 MoUs signed, half of them on construction of residential homes 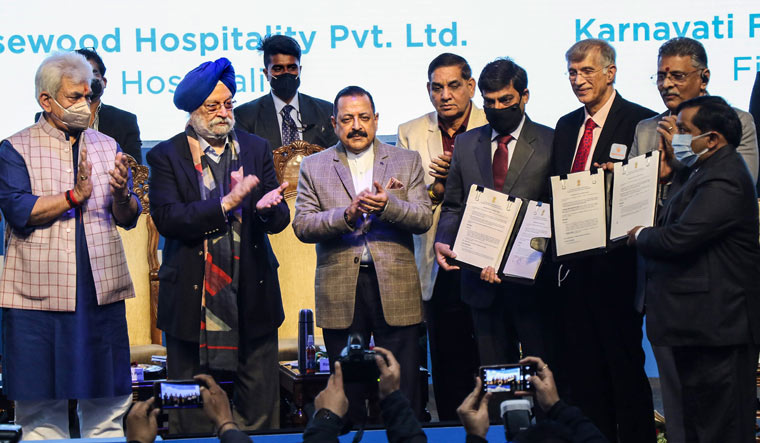 The Centre and J&K government held the first ever 'Real Estate Summit 2021' in Jammu on Monday to encourage people from across India to invest in real estate and property in Jammu and Kashmir.

Before Jammu and Kashmir was stripped of its special status and statehood, outsiders, classified as non-permanent residents, were barred from buying immovable property in J&K, applying for government jobs and taking part in elections.

The summit was told that under the new J&K Development Act, the term 'being a permanent resident of the state' as a criteria has been omitted to pave the way for investors from outside to invest there.

The summit was organised by the Union ministry for housing and urban affairs in collaboration with the J&K government. During the summit, 39 memorandum of understandings (MOUs) were signed, half of them on construction of residential homes.

The J&K government called the summit a “historic transformation in J&K", and said it had changed laws in the Union territory to allow investment from outside.

The summit comes in the wake of the recent decision by the government to permit sale and purchase of non-agricultural land.

The changes made in the land use laws allowed re-classifying of agricultural land for non-agricultural purposes. Regional parties criticised the decision and said the changes in land use were made to settle non-locals in J&K.

J&K Lt Governor Manoj Sinha said a similar event will be held in Srinagar in May next year. He said the government is committed to "break all walls that create hurdles" in making the UT on par with other parts of India.

He said the Union territory will have a Central secretariat very soon.

Unemployment in J&K has grown to the highest levels at 21 per cent according to a recent Centre for Monitoring Indian Economy (CMIE). The all-India average at 7.8 per cent.

Reacting to the Summit, former chief minister and NC vice president Omar Abdullah, said in a tweet: “Once again the true intentions of the government have been brought to the fore. While offering to secure the land, jobs, domicile laws & identity of the people of Ladakh, J&K is being put up for sale. People of Jammu should beware,“investors” will buy up land in Jammu long before Kashmir.”

Sunil Dimple, president of Jammu-based Mission Statehood J&K, and his supporters held a protest against the summit a few kilometers from the venue.

"J&K is being put up for sale. They are trying to change our demography, history, identity and culture. We don't accept any such development which changes the character of J&K. They are auctioning J&K," said Dimple.