'Long past time to break up Amazon': Elizabeth Warren reacts to report on India 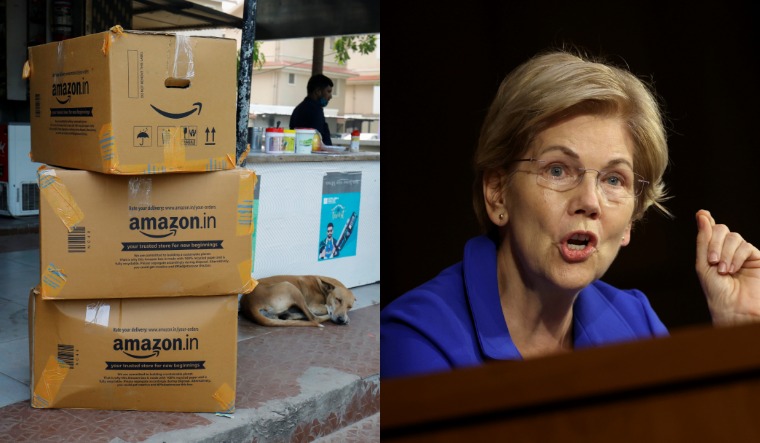 US Senator and former contender for the Democratic presidential nomination Elizabeth Warren has never shied away from criticising e-commerce giant Amazon.

Among the issues she highlighted while seeking the Democratic presidential nomination was the need to break up 'big tech companies'. In March 2019, Warren wrote a post on Medium, arguing for breaking up Amazon, Google and Facebook.

She wrote, "big tech companies have too much power—too much power over our economy, our society, and our democracy. They’ve bulldozed competition, used our private information for profit, and tilted the playing field against everyone else. And in the process, they have hurt small businesses and stifled innovation."

On Thursday, Warren reiterated her call to break up Amazon. She tweeted, "You can be an umpire or you can be a player, but you can’t be both at the same time. Amazon takes advantage of its power to tilt the playing field and crush small businesses. It’s long past time to break them up."

Warren tweeted a Reuters report on demands for a probe into Amazon's activities in India. In an investigative report, published on Wednesday, Reuters claimed Amazon "ran a systematic campaign of creating knockoff goods and manipulating search results to boost its own product lines in India". Reuters reported its investigation of documents revealed, "Amazon’s private-brands team in India secretly exploited internal data from Amazon.in to copy products sold by other companies, and then offered them on its platform."

Warren had taken note of the investigative report by Reuters. She tweeted on Wednesday, "These documents show what we feared about Amazon’s monopoly power—that the company is willing and able to rig its platform to benefit its bottom line while stiffing small businesses and entrepreneurs. This is one of the many reasons we need to break it up."

Amazon responded to the investigative report by calling the claims "factually incorrect and unsubstantiated". Amazon claimed it showed “search outcomes primarily based on relevance to the shopper’s search question, no matter whether or not such merchandise have personal manufacturers supplied by sellers or not.”

Interestingly, Warren's outrage against Amazon was echoed across the political divide. Ken Buck, a Republican on the House of Representatives antitrust subcommittee, tweeted, "These documents prove Amazon engages in anticompetitive practices such as rigging search results and self-preferencing their own products over competitors. More concerning, it contradicts what Jeff Bezos told Congress. Amazon and Bezos must be held accountable."

In India, Ashwani Mahajan, co-convener of the Swadeshi Jagran Manch, called for a boycott of Amazon in order to "save small traders" and "stop monopolisation of markets, data and minds".