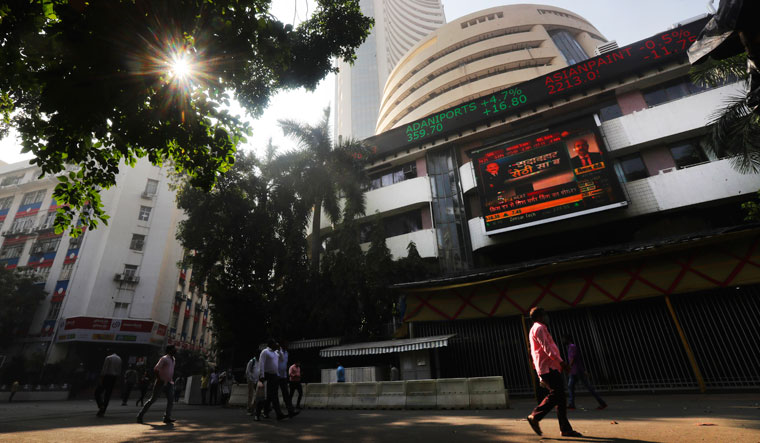 Equity gauges Sensex and Nifty on Wednesday climbed to new record highs, stretching their winning run to the fifth consecutive session, as investors continued to lap up auto, power and infra shares.

M&M was the top gainer in the Sensex pack, zooming over 5 per cent, followed by PowerGrid, ITC, L&T, Tech Mahindra, Tata Steel and Titan.

On the other hand, Maruti Suzuki, HUL, Nestle India, Axis Bank and SBI were among the laggards.

Sectorally, BSE auto, utilities, momentum, industrials and power indices rallied up to 3.46 per cent, while realty index ended in the red.

Broader midcap and smallcap indices surged up to 1.56 per cent.

"Auto stocks led by Tata Motors propelled the Nifty to new highs of 18200 with good support from infra and metal stocks on the launch of the Master Plan for Infrastructure Development and Multi-Modal Connectivity, S. Ranganathan, Head of Research at LKP securities, said.

As the street awaits earnings today from big IT names, Tata Group stocks hogged the limelight despite profit-taking in late afternoon trade, he added.

Elsewhere in Asia, bourses in Shanghai and Seoul ended with gains, while Tokyo was in the red.

Stock exchanges in Europe were also trading on a positive note in mid-session deals.

On the forex market front, the rupee ended 15 paise higher at 75.37 against the US dollar.