Shah sets target of one PAC in every other village. Presently, there are one in ten 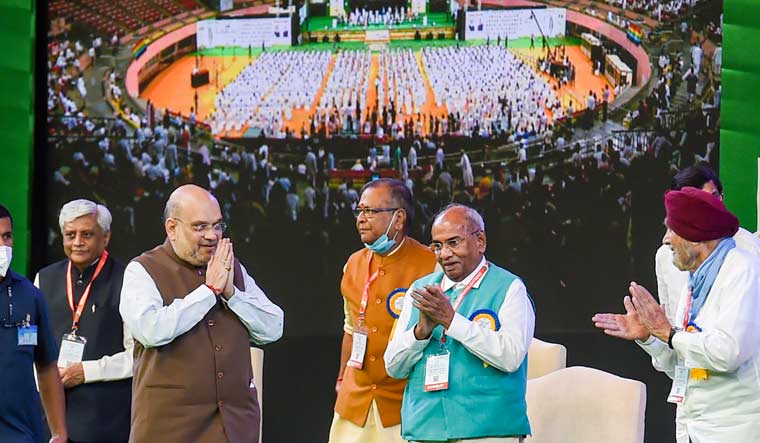 Asserting that cooperatives will also play a crucial role in making India a $5 trillion economy, Union Cooperation Minister Amit Shah on Saturday said the Centre will soon come out with a new cooperative policy and work in tandem with states to strengthen the cooperative movement.

Shah, who is also the Union Home Minister, also announced that the number of primary agriculture cooperative societies (PACs) will be increased to 3 lakh in the next five years. At present, there are about active 65,000 PACs.

Further, the government is working on setting up cooperative common service centres, national database besides a national cooperative university, he added.

Shah was speaking at the first Sehkarita Sammelan or National Cooperative Conference. The Ministry of Cooperation was formed in July this year.

Addressing the gathering comprising over 2,100 representatives of different cooperatives and nearly 6 crore online participants, Shah said some people wonder why the Centre created this new ministry as the cooperative is a state subject.

Shah said there could be a legal response to it, but he does not want to "get into this argument" to make it centre versus states. (Main state aur centre ke jhagde mein padna nahi chahta, iska kanooni jawab aaram se diya jaa sakta hai).

The Centre, he stressed, will cooperate with states and "there will be no friction".

"We will work with all states to take forward the cooperative movement," he said, and added the Ministry of Cooperation has been formed to strengthen and modernise the sector.

Stating that there is a need to make cooperatives survive in a competitive environment, the minister said a new cooperative policy will be brought as part of the government's 'Azadi Ka Amrit Mahotsav' initiative to celebrate and commemorate 75 years of progressive India.

"Earlier a policy was brought in 2002 by the then Prime Minister Atal Bihari Vajpayee, and now the Modi government will start working on a new policy," he said.

Besides this, the government is going to amend the Multi State Cooperatives Act as well as modernise and digitalise PACs in the country.

"We have kept a target to have one PAC in every other village. In the next five years, the number of PACs will be increased to 3 lakh," he said.

Presently, there is one PAC for every 10 villages in the country, he said.

The government is also working towards making PACs as farmer producer organisations (FPOs). Also, PACs need to be made professional for which focus will be given on the skill development of members, he said.

Even cooperative credit societies will be strengthened and expanded in more areas. The role of PACs will be enhanced in priority sector lending, he added.

Among other steps to be taken to strengthen the sector, Shah said the government is working on setting up of cooperative common service centres, a national database and a national cooperative university.

Referring to the problems being faced by cooperatives on the taxation front and other issues, Shah said he was aware of the concerns and assured that there would be no injustice towards them.

Stressing that the cooperative movement was more relevant today than ever, Shah said, "Maybe cooperatives have less financial strength but our membership strength is so much that no one can defeat us. The time has come to start something new."

He said cooperatives can contribute a lot in the development of the country and will also play a crucial part in making India a $5 trillion economy.

In many countries, cooperatives came into existence through the law, but in India, it is part of the culture, he said and added, "this is not a borrowed concept and this sector can never be irrelevant."

While cooperatives like IFFCO, Amul, Lijjat Papad and KRIBHCO have achieved a milestone in areas like milk and fertilisers, but there are many other areas like seed, food processing where cooperatives can tap the potential, he said.

He said "the time of neglect (of the sector) has ended and the time to prioritise it has begun. Let's work together."

There is no other path other than cooperative that can empower crores of farmers, backward people, dalits and women in the country, he said.

Cooperative is not something new to India. Since 1904, the sector has achieved many milestones and seen many ups and down but it never stopped, he said, and urged cooperatives not to stop this movement.

The success of cooperatives would depend on four things—determination, clear intention, hard work and working in unity, he added.