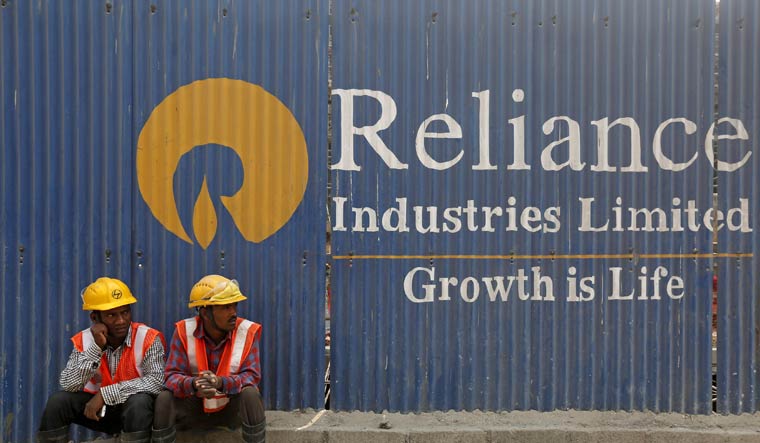 Labourers rest in front of an advertisement of Reliance Industries Limited at a construction site in Mumbai, India, March 2, 2016 | REUTERS/Shailesh Andrade/File Photo

BluSmart is a ride hailing platform and has only all-electric vehicles in its fleet. Currently operating only in the Delhi-NCR region, the company has plans to expand into other major cities in India.

Under the partnership, Jio-bp and BluSmart will collaborate in planning, development and operation of EV charging infrastructure at suitable locations in cities where BluSmart will operate. In the first phase, these EV charging stations will be rolled out in the national capital region. Each charging station will be able to accommodate at least 30 vehicles.

“Jio-bp will be at the forefront of EV infrastructure development in the country,” said Harish Mehta, CEO of Jio-BP.

Jio-bp has plans to set up a distributed network of thousands of battery swap stations over the next five years at its retail outlets and other urban locations like residential and commercial complexes, malls, hotels, business parks and IT hubs. Jio-bp operates a network of fuel retail outlets in India, with plans to expand to 5,500 outlets in five years.

“Leveraging bp’s learnings from the UK with bp Pulse, where they have the country’s largest EV charging network; from Germany through their Aral brand—Jio-bp intends to bring in the latest in EV technology to our consumers. Our partnership with BluSmart is a significant milestone in our vision of offering new age low-carbon emitting, cleaner and more affordable options,” said Mehta.

Anmol Jaggi, the co-founder and CEO of BluSmart said that EV superhubs will be the future of EV charging providing seamless charging access to consumers and ride-hailing fleets and they will be jointly building some of the largest EV superhubs.

In April this year, Hero MotoCorp, the country’s largest two-wheeler maker had announced a battery swapping joint venture with Taiwan’s Gogoro. Ola Electric has also announced plans to set up a hypercharger network of 1 lakh charging points across 400 cities in five years.

For Mukesh Ambani, battery charging network is just one part of his mega ambitions in the new energy space. Ambani announced last week that RIL has started developing the green energy Giga Complex in Jamnagar. It has targeted investments of Rs 75,000 crore in the next three years to set up four giga factories.