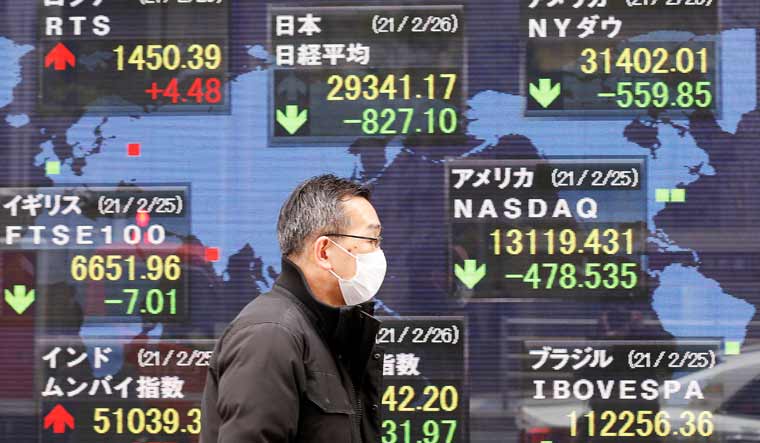 FILE PHOTO: A man walks past a stock quotation board at a brokerage in Tokyo, Japan February 26, 2021. REUTERS/Kim Kyung-Hoon/File Photo

The BSE Sensex plunged nearly 2,000 points and the NSE Nifty 50 index tumbled more than 550 points on Friday, tracking a global rout in stocks as a sharp rise in US bond yields and geopolitical tensions in the Middle East worried investors.

Overnight, US stock markets had tumbled as a sharp rise in US government bond yields and worries over likely rise in inflation raised the risk that the Federal Reserve may tighten its policy and raise interest rates earlier than expected.

On Thursday, the benchmark 10-year US bond yield surged to over 1.6 per cent, a one-year high, before retreating. This has got investors worried that the easy money policy unleashed by central banks in the backdrop of the COVID-19 pandemic may end at some point, and there may be some reversal of foreign institutional flows from emerging markets. India has been a large recipient of FII flows; so far this year foreign portfolio investors have pumped in Rs 45,260 crore in India’s equity markets on top of the Rs 1.7 trillion they invested in 2020.

The worries come despite Fed officials stating earlier this week that any rate tightening is unlikely unless the US economy recovers.

“The bond market is expecting the likely rise in inflation to push the US Federal Reserve to either lower monthly bond-buying or hike interest rates, an adverse factor for markets like India, which have been a major recipient of foreign inflows of late,” said Devang Mehta, head of equity advisory at Centrum  Broking.

On Thursday, the United States carried out airstrikes against facilities of Iran-backed militias in Syria, in retaliation to rocket attacks on US targets in Iraq, which has also weighed on investor sentiments.

In the domestic market, all the 30-shares in the Sensex and 50-share Nifty ended in the red. The Sensex losses were led by ONGC, which tumbled 6.6 per cent, while Mahindra and Mahindra, Axis Bank, Kotak Mahindra Bank and Bajaj Finserv also declined 6 per cent.

Other heavyweights like Larsen and Toubro, HDFC and HDFC Bank, State Bank of India and Asian Paints also fell 4 per cent to 5 per cent on Friday.

The BSE IT index is also down 4 per cent for the week, tracking a sell-off in the tech-heavy Nasdaq index.

The midcap and smallcap stocks also fell, although they outperformed the benchmark indices; while the BSE MidCap index was down 1.75 per cent for the day, SmallCap index fell 0.7 per cent.

“Global stocks fell on Friday, with Asian shares down by the most in nine months, as a fall in global bond markets sent yields flying and alarmed investors amid fears the heavy losses suffered could trigger distressed selling in other assets,” said Deepak Jasani, head of retail research at HDFC Securities.

“In the immediate future, Indian markets could also bear the brunt of global correction, but as time goes it could recoup and standout,” said Oza.

Oza cites India’s V-shaped economic recovery, which could be stronger than other economies, high earnings growth expected over the next three quarters due to the low-base of last year and strong accumulation of foreign exchange reserves as the key reasons why India will stand out over time.

The Reserve Bank of India has added over $100 billion in forex reserves since March 2020 and therefore it will be in a better position to deal with any currency volatility, say analysts.