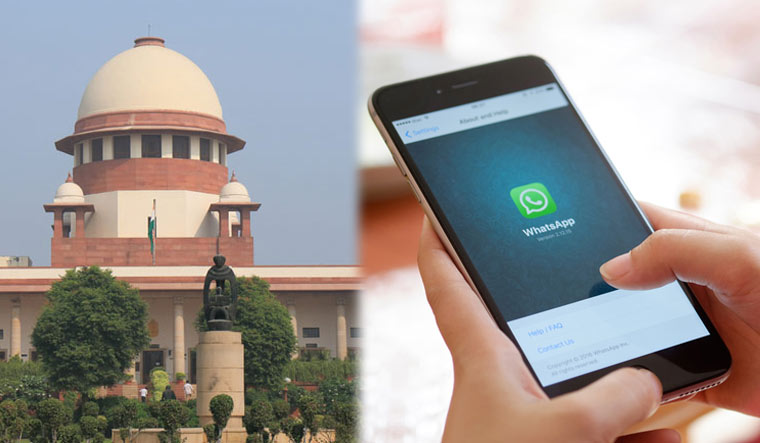 The Supreme Court on Monday asked the Centre and WhatsApp to reply to a fresh plea alleging lower standards of privacy for Indians in comparison with European users. The Supreme Court said it is the duty of the judiciary to protect citizens' privacy.

“People have grave apprehensions that they will lose their privacy, and it is our duty to protect them,” the top court said.

"You may be two or three trillion [dollar] companies, but people value their privacy more than money," a bench headed by Chief Justice S.A. Bobde told WhatsApp even as it sought to argue that Europe has special data protection laws that India doesn't.

The apex court issued notice to the government and the Facebook-owned app on an interim application filed by Karmanya Singh Sareen in a pending petition of 2017.

Senior advocate Shyam Divan, appearing for the petitioner, argued that the messaging app was applying lower standards of privacy for Indians, and they be barred from sharing data with Facebook.

The bench observed, "We are impressed by Mr. Divan's argument that it was proposed before us that a data protection law would be brought into force. Now, under this policy, you will share data of Indians."

Senior advocate Kapil Sibal, appearing for WhatsApp, contended that Europe has a special law (General Data Protection Regulation), and the app will follow law if the Parliament makes a similar law.

The bench, also comprising Justices A.S. Bopanna and V. Ramasubramanian, said that citizens have great apprehension about loss of their privacy, and they think that their data and chats are being shared with others and it has to be looked into.

The Centre told the apex court that the social media apps cannot share data of users, and data must be protected.

The petitioner challenged the privacy policy, alleging that there is huge amount of metadata of users, which is being shared for profit.

The top court had in 2017 referred WhatsApp's privacy policy matter to a Constitution bench, saying it concerns the larger issue of privacy and right to personal liberty.

The appeal filed in the apex court by Karmanya Singh Sareen and Shreya Sethi assailed a Delhi High Court verdict on the ground that no relief was granted for data shared by users post-September 25, 2016, and it amounted to an infringement of fundamental rights under Article 19 (Freedom of Speech and Expression) and 21 (Right to Life) of the Constitution.