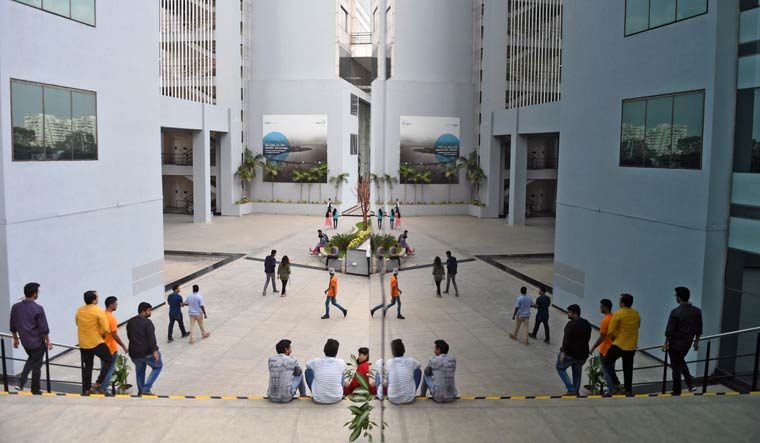 Strong revenue performance by Wipro and Infosys during the Q3 FY-21 has proved that the Indian IT services sector is on a growth path.

Wipro had its best revenue performance in nine years and a better than expected margin performance. Its revenue growth of 3.4 per cent QoQ (Quarter on Quarter) was broad-based and the growth guidance of around 1.5 to 3.5 per cent in the next quarter proves that there is a continuous growth momentum.

On the other hand, Infosys reported constant currency terms (CC) US $ QoQ revenue growth of 5.3 per cent in Q321. This is the company's best QoQ growth in the last eight years. For Infosys, the growth was also broad-based across verticals and regions. With the deal pipeline remaining strong for both IT firms, growth days seem to be back for the Indian IT services companies.

An observation by Motilal Oswal mentions that going forward, growth for Infosys should accrue from next-generation services like data, cloud, and security, while pressure would continue to remain in legacy services. It also observes that the deal pipeline for Infosys is also extremely robust. It also adds that the performance of Infosys during the quarter is indicative of the company's technical capabilities and strong sales team presence in the market and the company is expected to be a key beneficiary of a recovery in IT spends in FY22.

“There are many positives to Wipro's recent quarterly performance including strong guidance, pick-up in deal wins, robust cash generation and, improvement in IT services margin,” pointed out Amit Chandra, Vice President, IT research at HDFC Securities.

In a recent observation rating agency, ICRA has said that the India IT Services sector is expected to post healthy growth in FY22 and the sector outlook is stable. It says that the growth in INR is expected to be 7-9 per cent while in the US$ terms it will be 5-8 per cent growth for the FY2022.

ICRA expects that the demand for digital technologies and resumption of normal economic activity will drive the growth of the sector. However, ICRA also observes that there would be risks for the sector in the form of an increase in minimum wages, changes to eligible occupations, frequency and restrictions in issuance for H-1B visas.

“Demand for IT services has been mildly impacted due to the Covid-19 pandemic on all end-user industries though some sectors like travel, hospitality, retail, oil and gas have been impacted more severely. However, higher adoption of digital services has mitigated the impact to a large extent and 90-95 per cent work from home (WFH) was achieved for the majority of IT services players by April’20 through seamless integration for Application, analytics etc. The BFSI vertical was initially impacted as modifications were required in confidentiality agreements with clients while the BPO vertical was impacted due to infrastructure constraints," remarked Gaurav Jain, Vice President of ICRA.

"The pace of conversion of earlier deal wins into revenues have picked up pace. The focus of new deals is now on cost take-outs, cloud transformation, virtualisation and digital customer experience, although this has increased conversion time due to COVID-19. The pricing pressure mostly seen in legacy work during contract renegotiation too has been compensated by new digital transformation deals,” he added.

This ICRA expert further observed that the margins in FY 2022 is expected to remain in line with pre-COVID levels and the IT services sector companies have largely remained in net cash position owing to healthy margins, moderate working capital and capital expenditure requirements.