Will it be Hindi-Japani bhai bhai now?

Amid souring of relationship with China, India woos Japanese companies and investors 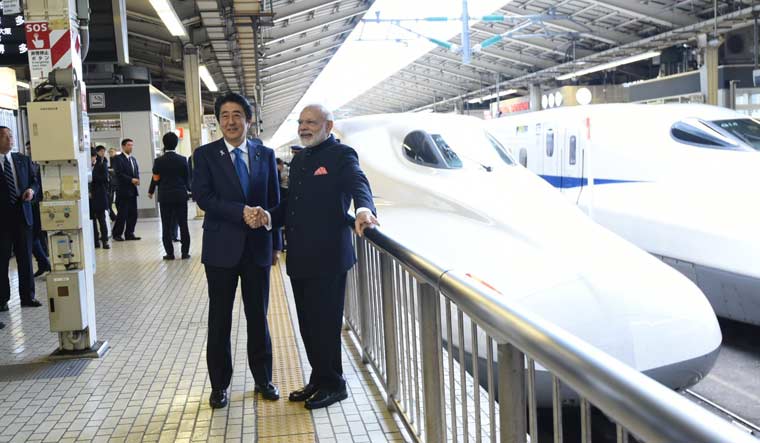 A friendship that has stood the test of time is fast blossoming into something deeper. Amid the dramatic transformation of the world order, India's alliance with Japan gets a shot in the arm.

As the 'Hindi-Chini bhai bhai' slogan lie in tatters after the deadly clashes between Chinese and Indian military in Galwan, India has stepped up its efforts to woo Japan—not just strategically, but on the economic front as well. Of course, it helps that Japan has traditionally been a rock-solid investor in India down the years.

Recent developments all point to both nations upping the ante. At this week's Japan Roadshow of 'Make in India', India's commerce and industry minister Piyush Goyal gushed that Japan is India's “most trusted and important trade partner.”

Even while hyperbole has been a commonplace indicator that Modi and his team really, really want something, most observers thought the usage of the word 'trusted' was telling enough. Japan's relationship with India had always been amicable, rooted in common Buddhist links and mutually common strategic desires. Even the imperial thrust during World War II when British India was in the opposing camp and Japanese forces invaded all the way till the gates of Kohima, there was no souring of feelings.

Post-independence, the Indo-Japanese relationship flourished, getting an added impetus with the menacing growth of China and the mutual distrust both nation's harbour toward it.

While India has been stepping up its strategic and military tie-ups with Japan—both nations are participants in the Malabar naval exercise, beside the US, economic partnership has also flourished. Japan is presently the fourth-biggest foreign direct investment (FDI) contributor to India, while it has funded many massive Indian infrastructure projects with near-zero interest loans, like Delhi Metro. It is also a major contributor to the upcoming Mumbai-Ahmedabad bullet train project as well as the Delhi-Mumbai expressway.

Now post the border clashes, India is wooing Japan with added vigour. It also helps that Japan itself has been quite keen for its businesses to get out of China. During the peaking of COVID-19 in the mainland, supply chains for Japanese manufacturing were badly impacted, prompting the Japanese government to announce a $2.2 billion dollar scheme to make Japanese companies to bring their plants back home, or at least go in for a “China plus one'' scheme.

India feels it could take advantage of this right now, to attract at least part of these businesses to manufacture, sell and export in India. There are many trade agreements between the two countries to grant quick visas, easy clearances and especially the free trade agreement in 2011 augur well for such a future collab. India's hope is that its cheap and abundant labour force, vast pool of engineering talent, land, the attractive domestic market and the advantageous geographical location which could make it an export hub for Japanese products headed to the middle-east, Europe and Africa would lure in Japanese capital. Not just the union government, but even state governments like those of Gujarat and Uttar Pradesh had made overtures to Japan in recent months.

This move fits in nicely with India's already declared intentions of moving away from China on the economic front. This has ranged from bans on over 100 Chinese apps and on Chinese FDI through the automatic route as well as restrictions on Chinese companies from bidding for Indian government contracts for lucrative infrastructure projects. This finds synergy in the government's own 'Aatmanirbhar Bharat' and 'Make in India' initiatives.

Analysts have also expressed doubts over how much India will be able to capitalise on the present situation. Despite India slashing its corporate taxes to some of the lowest rates in Asia, many Japanese firms have moved into eastern Asian countries like Vietnam instead of India. Many believe this is due to India's rickety infrastructure—power, roads and civic amenities. Not to forget, the nightmarish experiences of foreign investors when they encounter the notorious Indian bureaucratic red tape (despite all assurances of single window clearances and India having moved up the 'ease of doing business' index).

Shigehiro Tanaka, Japan's vice minister for economy, trade and industry did point this out at a recent bilateral trade talk, saying how many of the Japanese companies are of the view that India has a high potential to be a global export hub but it has to work to remove obstacles such as price competition, quality issues, and weakness in logistics systems.

No wonder DPIIT secretary Guruprasad Mohapatra said a fast track system is being worked out with the objective to identify and solve problems faced by Japanese companies and investors with their operations in India in an effective and time bound manner. The Government has also announced an exclusive-to-Japan industrial park in Guwahati, the thirteenth such in the country.

“These are integrated industrial parks with ready to move in infrastructure facilities, with world-class infrastructure, plug and play factories, pre-approved licences and investment incentives exclusively for Japanese companies,” he said.

But for both governments, with the China factor looming ominously in the picture, practical issues are but minor road bumps—the strategic need to jointly pose an economic (and strategic) opposition to China's 'super power' aggression outweighs all other considerations. No wonder that Goyal says “it is important that Japan and India expand trade and business relationships,” with the upcoming India Japan Industrial Competitive Partnership aiming for not just business deals, but even partnerships and technology transfers to promote investment, lower costs and facilitate clearances.