The loss of production in CIL would be around 1.5-2 million tonnes (MT) 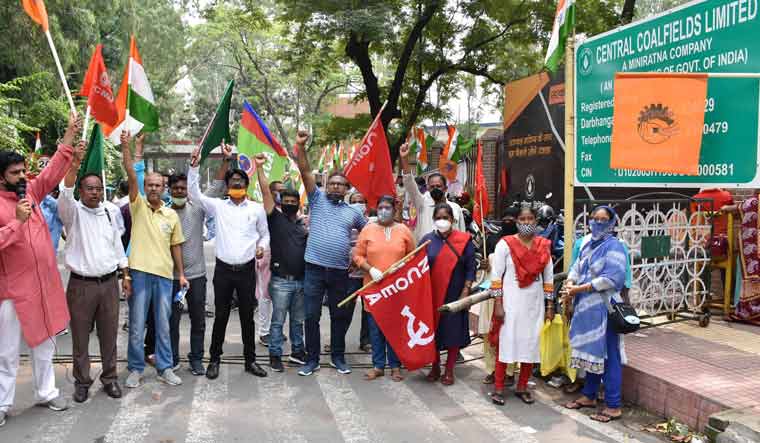 Ranchi: Workers of Central Coalfields Limited (CCL), a subsidiary of Coal India Limited, stage a protest outside the Raj Bhawan against privatisation of coal mines, in Ranchi, Friday, July 3, 2020 | PTI

Coal production and dispatches of Coal India were hit on Friday as the strike by trade unions entered the second day, union leaders claimed.

Coal India said that no untoward incident was reported at any of its arms due to restraint from all quarters.

Five trade unions, including RSS-affiliated Bharatiya Mazdoor Sangh (BMS), of Coal India, have gone on a three-day strike from Thursday to protest against the government's decision to start commercial coal mining.

"No untoward incidents were reported in any of the CIL's coal companies as the harmony prevailed with restraint from all quarters," Coal India said in a statement.

Zama alleged that in some pockets, the management of CIL subsidiaries particularly in CCL, SECL and WCL are trying to pressurise the outsourced agency and contractors to resume production activities but the unions are putting their fight to frustrate them.

"In ECL (Eastern Coalfields Ltd) (West Bengal) activists of five CTU's (central trade unions) are facing resistance at some of the mines from the union affiliated to Trinamool Congress (TMC) but, in all, the three areas including Rajmahal project located in adjoining Jharkhand state, there is 100 per cent strike," he said.

The loss of production in CIL would be around 1.5-2 million tonnes (MT), Zama claimed.

At SCCL the position of the strike is same as Thursday in its 27 underground and 19 open cast mines and the loss of production would around 1,50,000 tonnes per day, he claimed.

"The coal workers are genuinely perturbed and agitated this time because of adamancy on the part of the government.

"The coal workers are in good mood to fight out commercial mining by private companies as they are convinced that it would weaken and dilute the dominance of CIL and SCCL as, private companies with 100 per cent FDI through direct route would resort to cheap and slaughter mining with total disregard to the safety of the mines and the coal workers and conservation of precious mineral," Zama said.

The strike will continue on Saturday as well, he added.

Amid the ongoing strike, CIL despatched 5.78 lakh tonnes (LT) of coal on Thursday. This is around 42 per cent in regard to the normal off-take of 14 LT per day, calculated as the average of ten days immediately prior to stoppage of the operations, Coal India said in a statement.

Coal production was 4.81 LT, which is close to 38 per cent with regard to normal of 13 LT per day as per referred calculation.

Average attendance was close to 34 per cent on Thursday which is likely to improve further as some workmen have started resuming their duties.

CIL CMD Pramod Agrawal on Thursday had appealed to the striking workmen of CIL to resume their duties. "Considering the COVID situation in the country and the international scenario, Coal India's role assumes all the more important and I earnestly appeal to you to resume your duties in the larger interest of the nation," he said in a statement.

Nathulal Pandey, president of HMS-affiliated Hind Khadan Mazdoor Federation told PTI that "the strike intensified on the second day on Friday as some of the workers who due to various reasons could not join the strike have joined the protest today."

D. D. Ramanandan of CITU-affiliated All India Coal Workers Federation said that so far on Friday there are no reports of any disruptions or strike getting weaker. He also said that no major incident of violence was reported on Friday due to the ongoing strike.

Tapan Sen, general secretary of Centre of Indian Trade Unions (CITU) said, "The strike is total. Though at some places in West Bengal the police [are] in action and [are] trying to break the unity of the workforce on strike."

Zama claimed that more than 4 lakh coal workers, including 50,000 of SCCL and contract workers are participating in the strike.

Coal Minister Pralhad Joshi on Thursday had urged the employees of Coal India to end the ongoing strike and resume work.