The prospect of the economy reopening has cheered investors 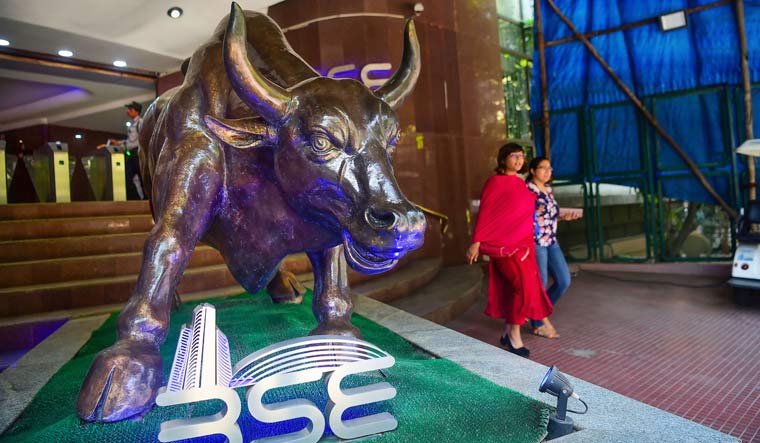 Since, its close at the 30,609 level on May 25, the Sensex has surged 3,500 points as of the close on June 3. The bulls have marched down the Dalal Street, despite a string of negative news flow. COVID-19 cases continue to surge in the country; in the past 24 hours, 8.909 new coronavirus cases were reported. On Monday, Moody’s Investors Service downgraded India’s sovereign rating to Baa3, its lowest investment grade rating. Several banks were also downgraded.

So, what’s driving the enthusiasm among equity investors?

“The expectation of the economy opening up has lifted investor sentiments,” Vinod Nair, head of research at Geojit Financial Services told THE WEEK.

To curb the spread of coronavirus, the union government had announced a 21 day nationwide lockdown from March 25. As the cases continued to rise, the lockdown continued to be extended. However, over the last few weeks, several restrictions were eased in areas where cases were low and factories started opening up.

Under new guidelines announced on May 31, several states have announced many more measures aimed at kickstarting business and economy. Now, in many states, except for containment zones, lot of businesses will begin to open.

Navneet Munot, chief investment officer at SBI Mutual Fund, said this gave a boost to equity markets, which had underperformed within the emerging markets through the COVID-19 crisis over the last 2-3 months.

“The still rising number of COVID cases, concerns on financial sector and lesser fiscal support all contributed to this weak performance. However, recent signs of the economy opening up have led to a sharp rally for Indian equities, helping reverse some of the underperformance,” he said.

Shares of some of the banks and non-banking finance companies were among the biggest gainers on Wednesday, with Kotak Mahindra Bank, Bajaj Finance, SBI, HDFC Bank and ICICI Bank gaining 2-3 per cent. Uday Kotak, the promoter of Kotak Mahindra Bank sold 56 million shares for around Rs 6,900 crore as a part of the process to reduce his stake in the bank to 26 per cent as mandated by the Reserve Bank of India.

Some of the other blue chip stocks like Nestle India, Larsen & Toubro, Titan and Hindustan Unilever were also among the gainers on Wednesday.

Nair expects markets to outperform in the short-term, given that there is ample liquidity available in the system. Foreign institutional investors have pumped in Rs 16,028 crore in India’s equity markets in just three trading sessions of June, compared with Rs 14,569 crore they invested in the month of May.

Munot says capital flows into India have historically been driven by growth prospects, rather than the ratings.

Nair is positive on banks in the near-term, given their recent underperformance. Similarly, he is very positive on pharmaceuticals and chemical stocks, given the strong domestic demand and firm prices of some chemicals in global markets. Also, companies looking to shift some of their production and dependence from China to other markets, should boost domestic companies, he feels.

Shares of software exporters and fast moving consumer goods should also offer stability in the current uncertainty, he added.

The government last month announced a string of relief measures, which included cheap loans and credit guarantees to small scale industries, NBFCs and street vendors among others. A few reforms aimed at addressing supply-side bottlenecks over the medium-term were also announced.

Despite the measures, several ratings agencies and brokerages expect India’s economy to contract as much as 5 per cent this year.

“The gravity of the slowdown may force the government to spend more to revive demand,” said Munot.

He believes that market gyrations will likely continue as we navigate a period of “heightened uncertainty.” However, investors who identify companies that will be winners during the crisis, and have patience to stay invested should end up “reaping rewards in the medium term,” he added.