Economic activity seen picking up in Punjab and Haryana, too: Report 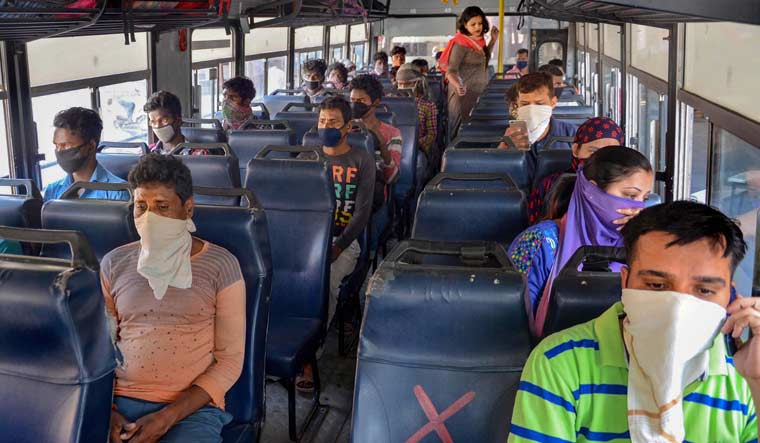 Passengers travel in a bus after the Punjab government resumed public transport services, during the nationwide COVID-19 lockdown, in Amritsar | PTI

Kerala, Punjab, Tamil Nadu, Haryana and Karnataka are leading India's economic recovery as the country is 'unlocking' itself from a more than two-month long COVID-induced lockdown, shows a study by Elara Securities Inc. This, even as more industrialised states like Gujarat and Maharashtra, are still struggling to manage the COVID-19 crisis.

All the five states, contributing nearly 27 per cent of the country’s GDP, have seen a pickup in activity, based on an analysis of indicators such as power consumption, traffic movement, arrival of farm products at wholesale markets and Google mobility data, Garima Kapoor, an economist at Elara Securities in Mumbai, wrote in a note.

“The best stimulus India can have is resumption of normal economic activity,” Kapoor said. “The country is witnessing an improvement in activity but it remains sporadic.”

According to the research note, Punjab and Haryana have seen an improvement in electricity requirement, reflecting demand from farm operations. Delhi has also shown an increase in power demand as well as mobility trends.

Another interesting insight from the study is that people are no longer indulging in panic buying, which was the case initially during the imposition of the lockdown. “We anticipate demand to persist in the upcoming months, as some are virus-related shifts in patterns,” Bloomberg reported citing Kapoor.

The Centre on Saturday allowed extensive relaxations, including opening of religious places and shopping malls in a phased manner from June 8. The Centre has given more powers to the states and union territories to ascertain and define a containment zone.