200% hike in import duty on toys to impact Indian businesses

Jobs and livelihood of more than 5 lakh people at stake 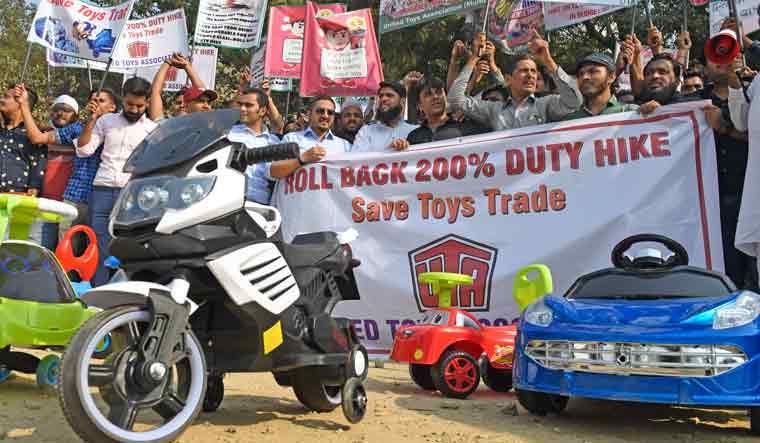 The 200 per cent import duty hike on toys, proposed in the Union budget, will lead to 100 per cent surge in the maximum retail price of toys across the country, resulting in loss of jobs and livelihood, said members of the United Toys Association (UTA). According to the estimates, more than five lakh people will lose their jobs if the proposal comes into effect.

The association voiced their concerns against Finance Minister Nirmala Sitharaman's proposal in the Union budget to raise the import duty on toys from 20 per cent to 60 per cent from the next fiscal. The minister mentioned that the step will support MSMEs and promote local manufacturing.

However, the traders insist that the step will spell disaster for their businesses as the demand for toys will come down drastically and that, in turn, will affect thousands of those employed in the trading business of toys. "We were not even consulted before this decision was taken," said Shabdi, President of United Toys Association, a newly formed organisation involving different stakeholders from the Indian toy market with the objective to promote and protect toy industry in India. "We estimate that within three to four months after the hike in import duty on toys comes into effect, there will be a scarcity of toys in the country. This is mainly because India imports 85 per cent of its annual toys requirement and only 15 per cent of this requirement is met with manufacturing in India. Traders and retailers will not be able to bear such high import duty and will have to eventually stop importing toys. On the other hand, Indian manufacturers will not be able to fulfil the overwhelming demand for toys in the same time period of three-four months and the existing stock of toys will be exhausted."

An increase in the import duty will lead upto 100 per cent surge in the MRP of existing toys in India. This means a toy costing Rs 500 will be priced between Rs 800 and Rs 1,000 after the imposition of 200 per cent hike in import duty on toys.

The range of toys that will bear the most brunt in this case will be the innovative toys, which include STEM toys, robots, flying toys, radio-control and battery operated toys, because these are all imported ones. Those that are manufactured in India are non-function toys and board games. "The government's budget proposal is a bid to balance trade deficit by including toys in non-essential commodity. However, the country's current toy production cannot fill the gap left by imported toys for the Indian market. We are against such unjustifiable hike in import duty on essential commodities that are not manufactured enough in India," said Abdullah Sharif, Vice President, United Toys Association.

The protesters have demanded the Indian government to treat toys as essential commodities that help in developing the cognitive and thinking skills in children, akin to educational books. He also deplored the situation of the Indian toy manufacturing industry saying that it was no match to the kind of "exceptional toys" that are produced abroad, including in China, in terms of superior quality and technology. "We are not against the Make in India policy, but the fact is that there is no competition for such toys in India. India is not ready at the moment for manufacturing toys that are at par with international standards in terms of quality, innovation and technology. We appeal the government to think about us traders too, before it decides to shut down importing of toys altogether. If the prices of imported goods is so high, after raising it by 60 per cent, traders will stop importing them and people will stop buying them which means the quality of toys will go down drastically. "

In the coming days, UTA will seek an audience with the Minister of Commerce and Industry Piyush Goyal and will appeal to revoke the unreasonable decision of increasing import duty on toys.