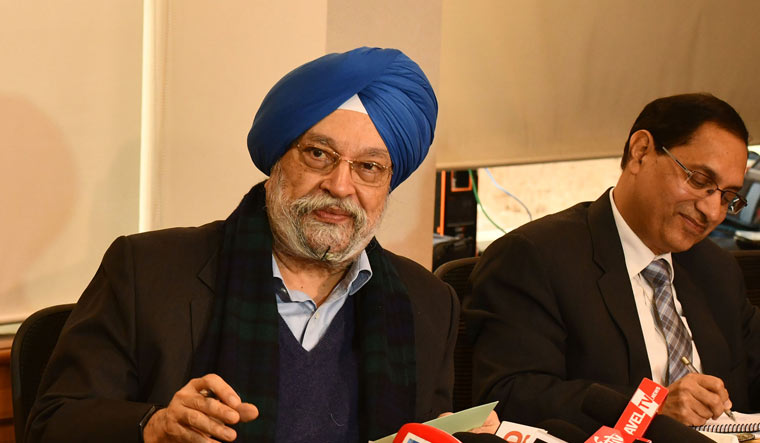 In its latest attempt to privatise the debt-laden Air India, the government on Monday invited an Expression of Interest (EoI) from potential investors for buying 100 per cent stake in the state-run airline.

During an interaction with the media, when Aviation Secretary Pradeep Singh Kharola said he is 'hopeful' that the new process would attract bidders, Civil Aviation Minister Hardeep Singh Puri intervened with a correction—that the government is “certain” and not just hopeful. Due to the lack interest from buyers, the government has been struggling in the past two years to sell the loss-making airline.

"After no bid for Air India was received in the first attempt made in 2018 and lessons learnt therefrom, we analysed the critical areas to make the current disinvestment bid more attractive to the prospective interested bidders. We have decided to sell off 100 per cent of management control. It is big change from our previous stand of selling 76 per cent," Puri announced while releasing the preliminary information memorandum for seeking EOI for strategic disinvestment of Air India. The government's unwillingness to fully exit from the debt-ridden airline was considered as one of the main reasons for its failure to sell it. Now, the government has set March 17 as the deadline for submitting expression of interest.

Calling Air India along with Air India Express as “a marvelous asset,” the aviation minister said it has 146 aircraft in its fleet, 82 of which are owned by it and have worldwide bilateral rights and spread over domestic as well as international slots.

Despite the infusion of about Rs 30,500 crore as per Turnaround Plan since 2012, Air India has been running into losses year after year.

Due to its accumulated debt of about Rs 60,000 crore, the minister said its financial position is in a very fragile condition. "Air India is currently under a debt trap," Puri said while adding that even after infusion of about Rs 30,500 crore as per Turnaround Plan since 2012, Air India has been running into losses.

Ernst & Young LLP India has been appointed as transaction advisor by the Centre for advising and managing the proposed strategic disinvestment of Air India.

The civil aviation minister further said the sector is capital intensive, extremely competitive and requires extremely skilled manpower needing rigorous and continuous training. Besides, the dynamic pricing system operates on very thin margins and is highly exposed to the volatility in fuel prices.

"Any private investor can turn it around and make Air India a profitable venture by bringing operational as well as financial efficiencies. The government has limited financial resources whereas the private investor can bring the required capital to make it turnaround. We hope and wish that Air India remains a vibrant airline and fly forever," Puri said while confirming that even after transfer of management, airline's name will be retained.

He also clarified about freezing of debt in Air India at Rs 23,286.5 crore which is approximately equivalent to the Written Down Value (WDV) of combined assets of Air India and Air India Express.

Kharola explained that the liabilities to be retained in Air India will be equal to certain current and non-current assets. Considering the combined figures as on March 31, 2019 the liabilities retained would be Rs 8,771.5 crore. And the remaining debt and liabilities of Air India and Air India Express will be allocated to a special purpose vehicle (SPV) Air India Assets Holdings Limited.

The contingent liabilities related to statutory dues and government dues will be indemnified by government.

"The contingent liabilities due to retired employees will be clarified at the RFP (request for proposal) stage," Kharoa clarified, and added that corporate guarantees given by Air India on behalf of Alliance Air will not be passed on to the new investor.

"All land and building assets, including paintings, arts and artefacts are not part of the transaction. However, certain land and buildings at Delhi, Mumbai airports and corporate office, which are core assets for running the airline, will be given to new investor on right to use basis for a limited period," Kharola further said. The government has committed to pay certain employees related dues before closing of transaction.

While talking about the concerns of the Air India employees, Puri said employees dues amounting to Rs 1,383.70 crore on account of Justice Dharmadhikari Commission's recommendation on past arrears will be paid by the Air India Assets Holding Limited before closing of the proposed transaction.

"Provision for Rs 207.63 crore towards wage arrears accruable to employees working on narrow body fleet has been made in the books of account of Air India. The treatment of this liability may be provided at RFP stage. Three per cent of equity shares of Air India to be offered to the permanent employees of Air India as ESOP," Puri further said.

In addition, the AISAM has also cleared the draft share purchase agreement (SPA) which includes various obligations from the part of government as well as the new investor, the minister added . "The employees service and benefits related protection and obligations have been provided in the draft SPA. However, the draft SPA document is not in public domain but available to serious Interest Bidders (IBs) in Virtual Data Room (VDR) which will also contain various information and documents for due diligence by the IBs."