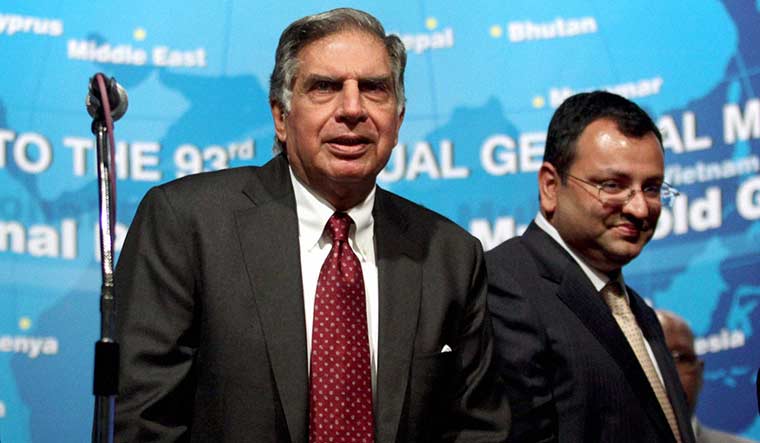 Tata Group patriarch Ratan Tata on Friday filed a petition in the Supreme Court seeking to quash a company law appellate court order directing the group's holding company Tata Sons to rehire the chairman it had fired in 2016, saying the judgment was "wrong, erroneous and contrary to the record of the case".

His petition is separate from the one filed by Tata Sons Ltd, the holding company of the USD 110 billion salt-to-software conglomerate, in the Supreme Court on Thursday that sought a stay on the National Company Law Appellate Tribunal's December 18, 2019, order to reinstate Cyrus Mistry as chairman.

Ratan Tata, who is chairman emeritus and a shareholder of Tata Sons, in the petition said the NCLAT judgment was wrong as it treats Tata Sons as a two-group company.

Mistry, he contended, was made the Executive Chairman of Tata Sons in a purely professional capacity and not as a representative of the Shapoorji Pallonji Group, which holds 18.4 per cent in Tata Sons.

Tata Trusts, of whom Ratan Tata had been a chairman for many years, holds 65.89 per cent of Tata Sons.

The petition said the NCLAT order wrongly suggests that "someone from the SP Group had been a director because of some entrenched right or convention".

Trustees of Sri Dorabji Tata Trust and Sir Ratan Tata Trust also filed separate petition in the Supreme Court saying the NCLAT judgment "suffers from grave errors of law and is essentially a judgment of unexplained conclusions which are based on no reasoning or reasoning which is, on the face of it, erroneous as a matter of law and practice of company law and/or is derived from factually incorrect assumptions."

Sir Dorabji Tata Trust and Sir Ratan Tata Trust own over 50 per cent of total shareholding in Tata Sons.

Tata Teleservices Ltd (TTSL) in its petition that it was not a party to the proceedings either before the NCLT or the NCLAT and it has been "denied the opportunity to defend the justified, legitimate and lawful removal of Mistry as its Director."

It said the NCLAT order was passed in violation of the principles of natural justice.

TTSL said Mistry was removed as director by a resolution unanimously passed at the extraordinary general meeting (EGM).

The Trusts in the petition said founded by the late Jamsetji Tata, Tata Sons was incorporated as a 'private limited company' in 1917. It subsequently became a 'deemed public' company in 1975 by operation of law, yet retained all the characteristics of a private company in its Articles of Association.

It said the alleged case of 'oppression' levelled by Mistry was based on events post 2014 and was raised by him, for the first time, only in December 2016 after he was sacked as executive chairman of Tata Sons.

It went on to state Mistry had no special rights linked to his group's shareholding or otherwise.

Mistry family's total investment till date is about Rs 69 crore in Tata Sons but has received, between 1991-2016 dividends of Rs 872 crore and the value of its shareholding had appreciated to Rs 58,441 crore in March, 2016.

"Cyrus Mistry, who was a director of Tata Sons since 2006 and was later its Chairman (till he was replaced by the Board in October 2016) had never ever raised even a whisper of any objection to the events of the past" which he and his family trust now cite as instances of oppressive conduct by Tata Trusts.

They "had not even raised any objection in relation to the affairs of Tata Sons," it said.

"This is untrue and contrary to the records and the articles of association of Tata Sons, which are undisputed and binding on the shareholders including the SP Group," Ratan Tata contended in his petition.

He said Mistry's leadership "was lacking" in "his reluctance to timely and meaningfully disassociate himself from his family business after he became the Chairman of Tata Sons and address any conflict in this regard, which was a condition precedent to his appointment as Chairman of Tata Sons".

Mistry, he alleged, "concentrated power and authority in his own hands" and "board members were being alienated on matters relating to Tata Operating Companies where Tata Sons had huge financial exposure and the Board of Tata Sons had to contend with such decisions being cast upon it as fait accompli".

The chairman emeritus targeted Mistry for the handling of the failed partnership with Japan's DoCoMo saying it showed his "complete obstinacy" as he attempted to resist complying with the legal obligations further. "This is not what the Tata Sons brand stands for. Quite to the contrary, honouring its commitments is one of Tata Sons' highest virtues it takes great pride in. Spat with DoCoMo brought ill-repute and reputational losses to Tata Sons."

Ratan Tata said the NCLAT reached a judgment based on "a contrived and self-serving reading of certain correspondence from which it derives erroneous findings which kaleidoscopically portray the larger theme of the judgment on purported oppression and prejudice to the Shapoorji Pallonji Group (SP Group)".

"The Impugned Judgment is also infirm because it blatantly indulges in propagating a selective narrative where relevant facts and records have been glossed over," he said. "The pretense of reasoning and judicial approach is betrayed by omission to consider the record itself."

It went on to state that it was "very unfortunate and distressing" that the NCLAT judgment without providing any proper evidence has passed adverse remarks against Ratan Tata who has spent more than half of his life in building the name of the Tata Sons and other Tata operating companies to one of the top global companies.

The judgment creates a wrong legal precedent that is vulnerable to being misused against several companies, including the public sector and government companies, it said.