There is great positivity about India, NITI Aayog CEO tells US audience 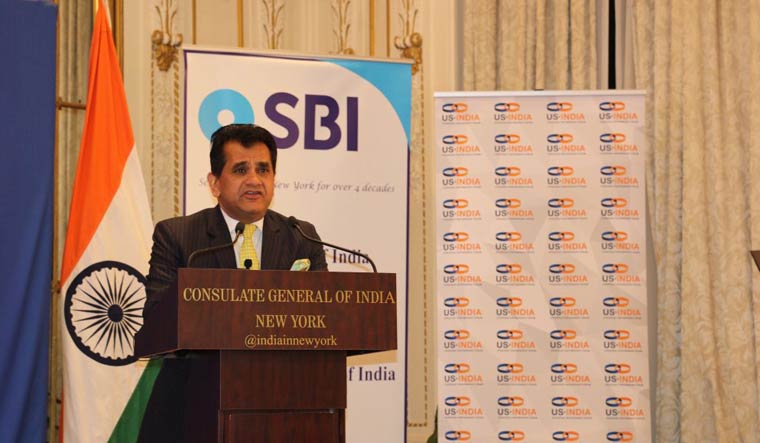 The series of path-breaking and ambitious reforms unleashed by the Narendra Modi government in the last few years will make India a very competitive and productively efficient economy in the long run, a top Indian official said on Friday.

"There is a great positivity about India," NITI Aayog CEO Amitabh Kant told PTI in an interview in Washington as he wound up his three-city US tour for a series of interaction with academicians, innovators, start-ups, corporate leaders and government officials in Boston, New York and Washington DC.

“People here believe that the fundamental reforms that have been gathered out in India across the economy, including GST, in terms of ending crony capitalism with the bankruptcy code, in terms of real estate reforms through RERA and in terms of direct benefit transfer will make India a very competitive and productively-efficient economy in the long run,” Kant said.

“Our process of urbanisation, infrastructure creation, using technology to leapfrog has just begun and you will see huge growth in the next three decades on the foundation of the reforms that have been carried out,” the NITI Aayog CEO asserted.

Replying to a question on the economic growth figures, which are among the lowest in recent years, Kant said these were short-term indicators and that India was on track to be a $5 trillion economy.

“The goal of the government is to make it a $5 trillion economy by 2025. We are all working towards that. We will deliver that and make India one of the easiest and simplest countries in the world. We are determined to reach the top 50 in the next year on World Bank's ease of doing business index and in the top 25 in the next three years,” he said, adding, “This goal is very much achievable."

Earlier in the day, Kant formally released the India Innovation Index in the United States at an event organised by the US India Business Council, along with Google.

India, under Prime Minister Narendra Modi, was moving fast on the track of ease of doing business, the NITI Aayog CEO said.

The prime minister, he said, had given the bureaucracy the challenge to crack India into the top 50 of the ease of doing business index in the next one year and into the top 25 in the next three years, he said, adding, “He has asked us to make India very, very easy and simple.”

“We are a great believer that India necessarily has to be an integral part of the global supply chain. And therefore, India has opened up its foreign direct investment regime across sectors,” Kant said, adding that India's FDI had grown significantly in the last five years, as against the across-the-board downfall in FDI in other parts of the world.

India, after the implementation of GST, was on its way to become one of the most formalised economies of the world, he said.

The country had ended crony capitalism by bringing in the insolvency and bankruptcy code, Kant said, adding that the third key reform was in the real estate sector.

These, along with biometrics and the direct benefit scheme, were transformational in nature, he asserted.

“Across different sectors, India has gone digital. That's the biggest transformation that has taken place. As a result, India has become hugely data-rich, even before it has become rich. This data richness of India has led to over 1,000 start-ups working in learnings, artificial intelligence and they are doing the kind of disruption that the world has never seen before. Many of them are doing path-breaking work," Kant told a select Washington DC audience.