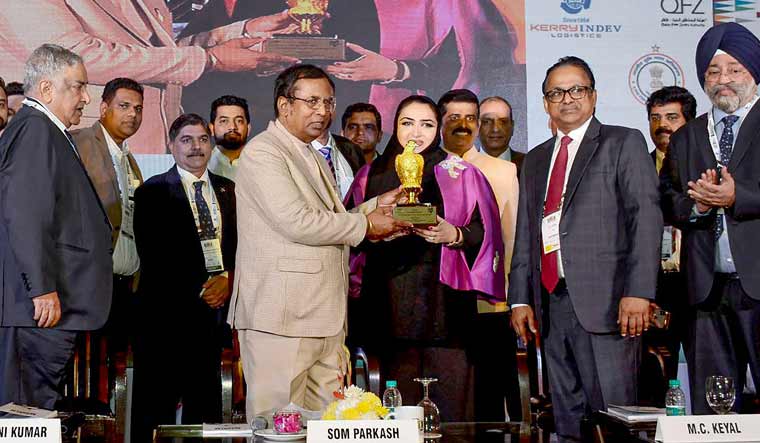 Minister of State for Commerce and Industry Som Parkash presents the awards at the inauguration of the LOGIX INDIA 2019 event, in New Delhi, Thursday, Dec. 12, 2019 | PTI

Logistics is the backbone of trade and industry. Saying this, the union minister of state for commerce and industry Som Parkash inaugurated Logix India, one of the biggest logistics event in the country, organised by the Federation of Indian Export Organisations (FIEO).

The government is also planning to invest around 100 lakh crore in logistics infrastructure in the next five years, the minister also pointed out.

How did logistics, an important but often brushed over ancillary of business and trade suddenly get all sexed up and attain centre stage? Paeans are being sung to its importance in the scheme of things, investments both foreign and private equity are flowing in, and start-ups study it as one of the most promising areas being eyed by entrepreneurs. Logistics startups like Rivigo and Delhivery both became unicorns in 2019 (start-ups with whose valuation crosses $1 billion).

Logistics, to put it simply, refer to the infrastructure backend of shipping goods from the production facility to the supply chain. This could be either transporting them to a port for export or to a warehouse for market distribution. From gigantic trucking firms to courier and express transportation services (not to forget unicorn startups) the sector is also overflowing with enterprising businesses that have transformed it from an unorganised field filled with small players to one where consolidation and economies of scale are now a trending mantra.

“Without efficient logistics, it is impossible to be successful in marketing, production and international trade, “ points out FIEO vice president Mahesh Chandra Keyal. “In advanced industrial societies, logistics competence is of great importance and customers expect products they bought will be delivered as promised.”

The exponential growth of India's logistics industry switched to top gear in recent years riding on the boom in e-commerce. The likes of Flipkart and Amazon needed efficient delivery services to get their millions of orders across—so much so that both organisations now have their own dedicated logistics fleets and are even looking at drones and other unconventional modes of delivery.

Today, one out of every four rupees of private equity that is invested in real estate sector is on warehousing, a crucial element of the logistics set-up.

The arrival of the GST regime in 2017 was another shot in the arm. Set free from the cumbersome process of multiple tax structures, excise, octroi and the likes while transporting across state borders, logistics businesses began soaring to the skies—according to the World Bank's logistics performance index, India has now moved up from No. 54 ten places to No.44.

With ambitious govt-spurred projects like Bharatmala, which envisages a network of roads and highways linking all economically crucial corners of the country, as well as the Dedicated Freight Corridor Project, not to forget the opportunity the US-China trade war offers India to ramp up its export business, estimates are that logistics is going to see boom time in India for quite some time.

It was included last December in the 12 champion sectors for special focus as part of the nation's 5 trillion dollar economy vision. Presently worth more than $160 billion, India's logistics industry is estimated to hit $215 billion in value in 2020, according to the Finance ministry.