Centre assures GST compensation payment to states, but does not specify timelines

States have not received monthly compensation since August 2019 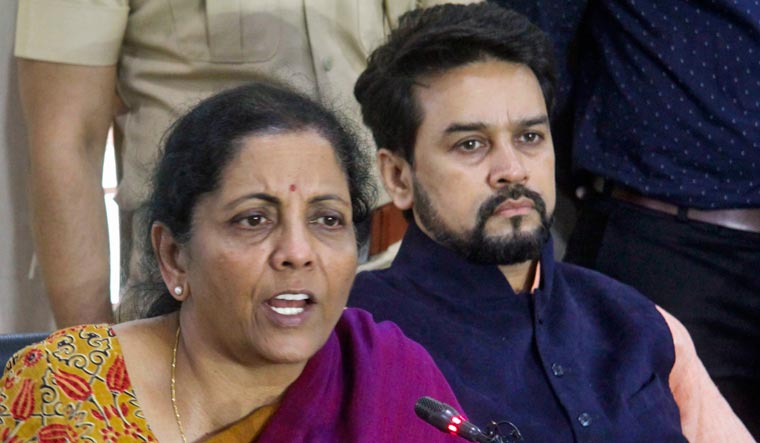 With states not being paid compensation for loss of revenue from implementation of GST since August, Finance Minister Nirmala Sitharaman assured the Centre will honour its commitment but did not say by when the dues will be cleared.

States—that surrendered powers to collect taxes on goods and services after local levies got subsumed into the Goods and Services Tax (GST) from July 1, 2017—were, through legislation, guaranteed to be paid for any loss of revenue in the first five years of GST implementation.

This monthly compensation was to be paid within two months, but states haven't received any such amount since August 2019. During the debate in the Rajya Sabha on the bill seeking Parliamentary nod for additional or supplementary spending in the current fiscal, Congress, Left and TMC raised the issue of non-payment of the GST compensation and sought to know when it will be paid.

The Finance Minister said the Centre was committed to discharging its obligation and asserted that "no one should have any doubt".

In the current fiscal, Rs 55,467 crore was collected till October 31, 2019 and Rs 65,250 crore paid to states. "There was excess payment of Rs 9,783 crore" during the current fiscal, she said adding the dues of the states will be honoured. She, however, did not reply to a pointed question from CPM's K.K. Ragesh on when the dues will be cleared.

Sitharaman said all states and not just non-BJP ruled states have not been paid compensation since August. On the issue of states not getting their due share from Integrated GST, which is levied on the transfer of goods from one state to another, the minister said no state claimed I-GST dues in 2017-18 but in the subsequent year it has been paid.

Claims were subsequently made and a group of state ministers has been set up to look into divisibility of the IGST revenue for 2017-18 and the matter will be put up before the GST Council - the highest decision making body of the indirect tax regime, no sooner the report of the group is presented, she said.

Sitharaman said Modi government was committed to the principle of cooperative federalism and will honour dues of the states.

After her reply, Rajya Sabha approved additional spending of over Rs 21,000 crore by voice vote. Lok Sabha had previously given its nod for such expenditure.

During the debate, Congress leader Jairam Ramesh said states have not been paid their GST compensation for four months. This delay together with the economic slowdown is adversely impacting state finances, he noted.

He quoted a letter written on the subject by Kerala Finance Minister Thomas Issac to Sitharaman to say that this non-payment constitutes a dispute between the Centre and the states but the GST law passed by the Parliament in 2017 does not provide for a dispute resolution mechanism.

The draft legislation Congress-led UPA had brought for GST had dispute resolution provision, he said.

"We have reached a stage where we have a serious dispute," he said, adding that the "first element of cooperative federalism is fulfilling your promises, fulfil what law has been passed". According to him, the states are guaranteed 50 per cent of the I-GST revenues but haven't been paid. "The central government is sitting on a corpus of Rs 1 lakh crore, of which 50 per cent is law mandated share of states but it is not being shared with states," he added.

Sitharaman, however, said there is no dispute between the Centre and the states over GST compensation payment as the Centre has not declined to recognise the share of the states.

Ragesh also said the state finances will deteriorate further with implementation of upcoming 15th Finance Commission recommendations as it may not give states the bonanza that the previous panel on sharing of tax revenues between centre and states had offered.

Ragesh said GST compensation is to be paid at the end of every two months but non-BJP ruled states such as Kerala, Madhya Pradesh, Rajasthan, Chattisgarh, West Bengal, Delhi and Punjab have not been paid. "You are taking it as an opportunity to push non-BJP states into financial crisis," he added.