US threatens France with tax on French cheese, wine in retaliation to digital tax 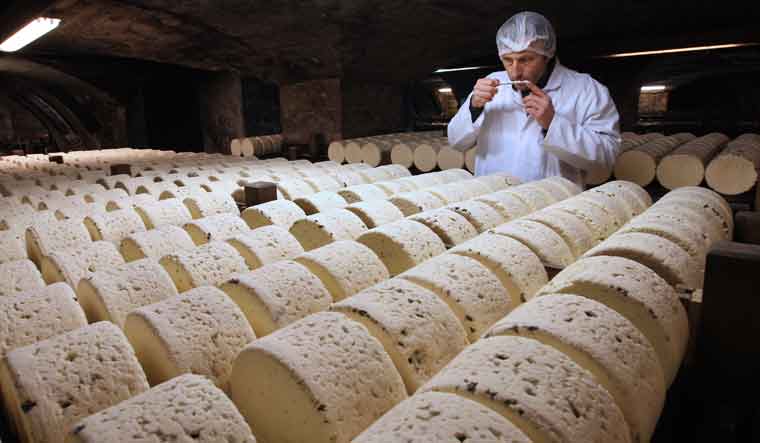 A refiner of Societe company smells a Roquefort cheese as they mature in a cellar in Roquefort, southwestern France | AP

The Trump Administration has determined that the French Digital Tax is discriminatory against American companies and as such has proposed tariffs of up to 100 per cent on $2.4 billion of French products, including cheese, sparkling wine, make-up and handbags.

The US Trade Representative announced this on Monday after it completed the first segment of its investigation under section 301 of the Trade Act of 1974.

The investigations, it said, concluded that France's Digital Services Tax or DST discriminates against US companies, is inconsistent with prevailing principles of international tax policy, and is unusually burdensome for affected US companies.

Specifically, USTR's investigation found that the French DST discriminates against US digital companies, such as Google, Apple, Facebook, and Amazon.

In addition, the French DST is inconsistent with prevailing tax principles on account of its retroactivity, its application to revenue rather than income, its extraterritorial application, and its purpose of penalizing particular US technology companies, USTR said.

The decision sends a clear signal that the US will take action against digital tax regimes that discriminate or otherwise impose undue burdens on its companies, US Trade Representative Robert Lighthizer said.

USTR said that it is issuing a Federal Register notice explaining that the French DST is unreasonable, discriminatory, and burdens US commerce.

The notice solicits comments from the public on USTR's proposed action, which includes additional duties of up to 100 per cent on certain French products.

The notice also seeks comment on the option of imposing fees or restrictions on French services.

The list of French products subject to potential duties includes 63 tariff subheadings with an approximate trade value of $2.4 billion.

The value of any US action through either duties or fees may take into account the level of harm to the US economy resulting from the DST, it said.

"Taking premature action that will adversely and disproportionately affect another OECD member state is contrary to the organisation's goals and shouldn't stand. We welcome this step from USTR on behalf of US companies being unfairly targeted and harmed by the French tax, they said.

"We encourage other member states considering similar actions to work within the OECD framework toward a comprehensive solution. We look forward to reviewing the report's findings in full," the two lawmakers said.

US Chambers of Commerce supported the move.

"The US Chamber strongly opposes France's DST, which discriminates against US companies. In our view, the path forward is for all parties to redouble efforts to devise a multilateral solution to the tax challenges posed by digitalization of the global economy in the negotiations now underway at the OECD, said Marjorie Chorlins, US Chamber's senior vice president for European Affairs.