Imports also declined 9 per cent to USD 40.29 billion in June 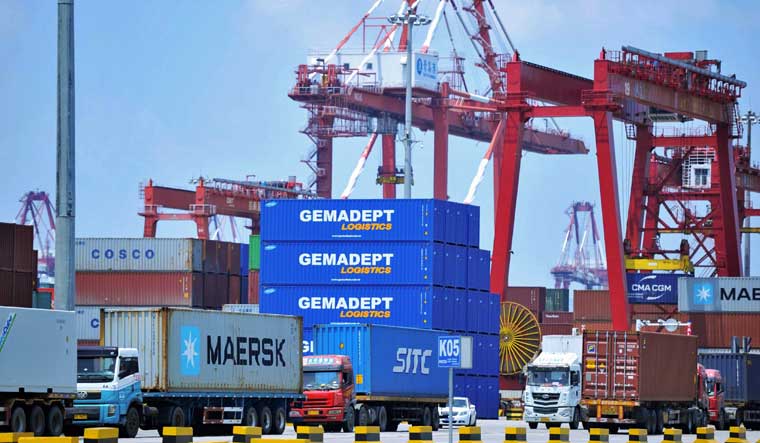 Punishing US tariffs on Chinese imports took effect on July 6, the first shot in what Beijing called "the largest trade war in economic history" between the world's top two economies | AFP

India's exports have entered negative zone after a gap of eight months recording a decline of 9.71 per cent to USD 25.01 billion in June, according to the government data.

Imports also declined 9 per cent to USD 40.29 billion in June mainly due to falling prices of petroleum products, leaving a trade deficit of USD 15.28 billion.

Exports were down on account of fall in shipments of gems and jewellery, engineering goods, petroleum products, plastic, handicrafts, ready-made garments of all textiles, chemicals, leather, and marine products, oil meals and oil seeds.

Commenting on the figure, Commerce Secretary Anup Wadhawan said "the decline in exports in June is due in large part to a base effect of an extraordinarily good month in June 2018".

In June last year, the outbound shipments were USD 27.7 billion.

He said the negative growth is also consistent with certain global trends, which have impacted exports in recent months.

The World Bank in its Global Economic Prospects (June 2019) has projected weakening of global trade in 2019, he told reporters.

Global trade is projected to grow at 2.6 per cent this year, a full percentage point below their previous forecast.

Various major economies of the world have also shown negative export growth in recent months. According to the latest WTO data available for April, there is negative growth in Japan (-5.88 per cent), European Union (-4.30 per cent), China (- 2.75 per cent), USA (-2.12 per cent).

The ministry in a statement said that temporary shutdown of ONGC Mangalore Petrochemical Ltd (from April 17 to June 28) for maintenance has adversely impacted exports of petroleum products.

Jamnagar refinery also experienced a routine maintenance-related disruption in June 2019, which is likely to abate by mid-July, it said.

Engineering goods have been affected because of a fall in global prices of steel.

Trade deficit during the period narrowed to USD 45 billion, from USD 46 billion during April-June 2018.

Gold imports increased 13 per cent to USD 2.7 billion in June.

Further, according to the latest data of the RBI, services exports in May were USD 18.68 billion, a growth of 15.49 per cent.