Electoral bonds worth Rs 5,029 crore issued till May 4

10,494 electoral bonds released in nine phases till May 4 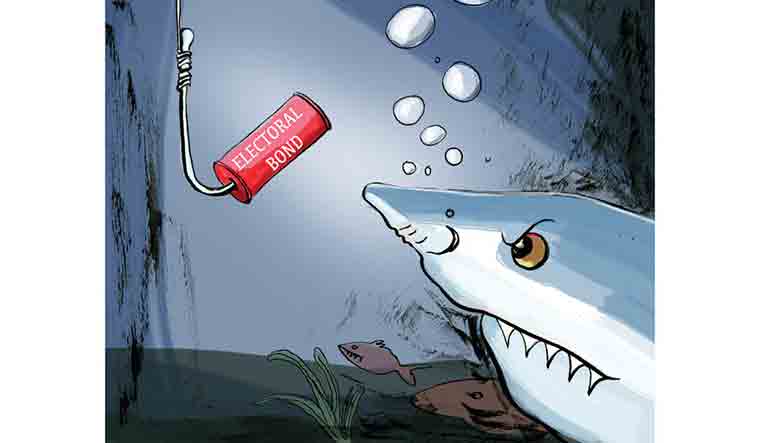 The scheme of electoral bonds notified by the Centre in 2018 has been challenged in the Supreme Court | Jairaj T.G.

At an average of Rs 48 lakh per bond, the State Bank of India (SBI) has issued 10,494 electoral bonds in nine phases so far, worth over Rs 5,029 crore, an RTI response has revealed.

SBI is the only commercial bank which has been authorised by the Centre to issue electoral bonds ever since it was envisaged last year.

In a response to Mumbai-based RTI activist Manoranjan Roy's query on the total numbers of electoral bonds issued and the names of companies or individuals giving the donations, the bank said it has issued 10,494 bonds worth Rs 5,029 crore till phase nine which was completed on May 4.

The bank, however, did not disclose the names of companies or individuals giving donations to political parties citing it to be "third party" information that is exempted under under Section 8(1)(E)(i) of the RTI Act.

Replying to another query on how many of the electoral bonds issued have been submitted for withdrawal, it replied that (out of 10,494 issued) 10,388 bonds have been withdrawn/redeemed till the phase nine.

Commenting on the reply, Roy said, "Augmentation of electoral bonds are nothing but a legalised route to have an unholy nexus between political parties and corporate entities and it will lead to the highest level of corruption in the country."

"It can be little less destructive if this is made transparent by revealing the names of bond-seekers," the RTI activist said.

Roy further suggested that corporate entities could spend this huge amount of money through their Corporate Social Responsibility (CSR) schemes or individuals can benefit the needy and marginalized people in the society rather than donating to political parties "who spend the amount to woo voters".

Notably, the Electoral Bond Scheme, 2018, notified by the Centre in January last year, has been challenged in the Supreme Court.

Only those political parties registered under Section 29A of the Representation of the People Act, 1951 (43 of 1951) and which secured not less than one per cent of the votes polled in the last general election to the House of the People or the Legislative Assembly of the state, shall be eligible to receive the bonds.

The bonds may be purchased by a person who is a citizen of India "or incorporated or established in India," the government had said in a statement last year. These remain valid for 15 days and can be encashed by an eligible political party only through a bank account with the authorized bank within that period only.

The Association for Democratic Reforms (ADR), a voluntary group working in the field of electoral reforms, has demanded a stay on the sale of electoral bonds while the CPI(M) has challenged it before the Supreme Court in separate petitions.