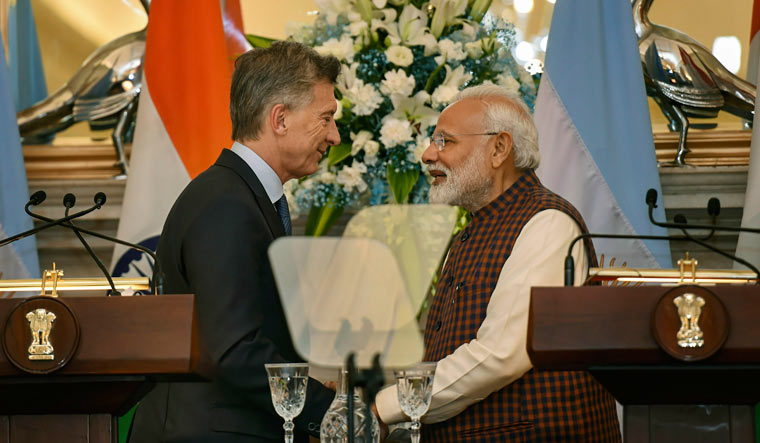 Argentina’s President Mauricio Macri called on India Inc to invest in trade and commerce, saying there is an ‘endless potential to invest and partner’ in the Latin American nation.

“I spoke to PM Modi on energy efficiency and on tapping non-conventional energy sources,” Macri said addressing the India-Argentina business forum organised by the Confederation of Indian Industry (CII) in New Delhi on Monday. Earlier, addressing the meeting, Union commerce & industries minister Suresh Prabhu pointed out how areas ranging from agriculture to non-conventional energy had immense scope for collaboration between the two countries.

Argentina also became the latest nation to sign the International Solar Alliance, a pet project of India that hopes to tap this energy source as per UN climate change guidelines.

As his three-day state visit to India got underway, it was clear that both emerging economies were in a mutual admiration society sort of grip, exploring one after the other areas of common interest. India has made it clear that it wants to triple exports to this Latin republic.

Argentina has immense agricultural resources, in both produce as well as farming technology— Modi hopes to gain favourable deals bilaterally. Argentina also has the biggest shale deposits in the world outside the US. That, and mining, particularly of lithium, is something that India is keen on investing in.

Then there is Argenina’s prowess in manufacturing light combat aircraft (LCA). In fact, a defence delegation is expected to visit Buenos Aires right from the Presidential visit, according to reports.

Argentina, on its part, wants access to India’s burgeoning technology sector as well as non-conventional energy sources, including investments from industry majors from India in both sectors in Argentina.

Relations with the faraway South American country got a fillip two months ago during prime minister Narendra Modi’s  visit to Argentine capital Beunos Aires for the G20 summit.