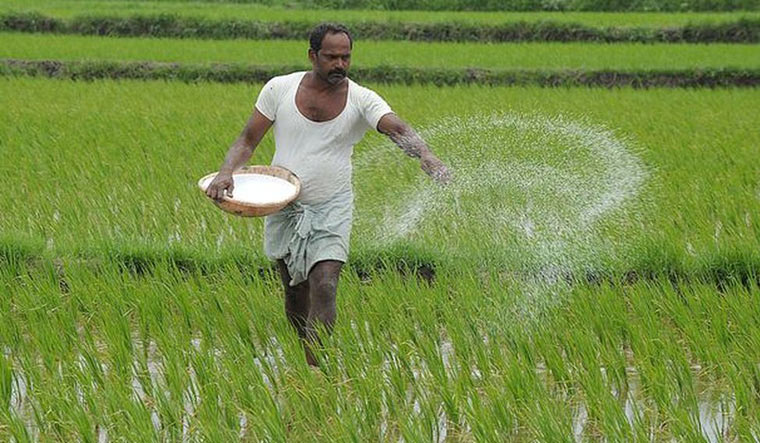 As the agrarian distress has reached the political centre stage, posing a key electoral risk to the ruling Bharatiya Janata Party, the Centre is mulling over various schemes to ease off the anger among Indian farmers. Prominent among the proposed schemes is a direct cash transfer to the farmers, and a decision on it is likely to be announced in the upcoming budget on February 1. However, some estimates suggest that the government may not burn a hole in its pocket by offering mere cash doles to the farmers.

A study by NITI Aayog is exploring the various aspects of initiating a direct transfer of benefits to farmers on fertilisers and other inputs like seeds, electricity, and irrigation, on which a subsidy could be available. At present, about Rs 1.8 lakh crore worth subsidy is allowed for farmers.

“There are structural issues in farming which need to be addressed. Like, say in marketing and processing. But in interim, there are other options suitable for boosting farmers' income. This could be done in many ways, including the use of direct cash transfers," Ramesh Chand, member (agriculture), at the NITI Aayog told THE WEEK.

The government think tank, which was working on a paper looking at the issue of farmers' income, is likely to have suggested that the approach, if adopted by the government, can benefit landed farmers (those who own land) immediately.

A proposal on direct investment support (DIS) scheme, in line with the schemes that are already offered to landed farmers in states like Telangana and Odisha, was submitted by the Aayog to the agriculture ministry. The proposal suggests a direct cash support in the range of Rs 10,000 to Rs 15,000 per annum to farmers.

“We have approved the proposal, though it is still hard to estimate what would be the extra cost for implementing this... There could be some savings as well,” said an agriculture ministry official, aware of the development.

NITI Aayog's own studies on direct benefit transfers had flagged issues like the mode of identifying subsidy beneficiaries and the regularity of transfers to them. These studies had indicated that some beneficiaries stopped receiving their subsidy transfers after a while and could validate their claims later with bank passbooks.

A committee under Ashok Dalwai for doubling farmers' income was also formed earlier and has been looking at various options to do so. The committee is likely to have made its recommendations to the prime minister, suggesting direct cash transfer to farmers.

However, another issue was the Aadhaar-linked identification that was needed for farmers to open bank account. Now, with the Aadhaar eligibility criteria relaxed to an extent by the Supreme Court, and in the hope of receiving benefits from the government, many had opened new bank accounts under the Centre's Jan Dhan Yojana. Finance ministry data suggest that close to 30 per cent of the 3.2 crore Jan Dhan accounts opened in last year are that of farmers or of those in agriculture allied activities.

Currently, the government claims to provide direct benefit transfer on fertiliser subsidies to farmers as discounts on their next purchase from that retailer. But in reality, these subsidies are claimed by fertiliser firms based on their actual sales done by retailers to the beneficiaries. The NITI Aayog was tasked to change this system too.

The Aayog's challenge was to ensure traceability of subsidies to the right farmers, as the government had allowed farmers to claim subsidy using a host of documents other than Aadhaar, like ration cards, voter ID, and PAN among others.

“The subsidy outflow had to be monitored. For that, we need to uniformise the data from all these identity platforms and identify the beneficiaries. Once this last mile link is established, such a system could be thought of in a more practical manner," said Chand.

The prime minister, who also heads the NITI Aayog, will take a final decision based on the studies and comments received from various ministries on the proposed direct cash transfers. Whether he is convinced with the idea or not would only be clear by February 1.