The Last Supper, as imagined by Indian painters

The exhibition is on view online at Saffronart till April 16 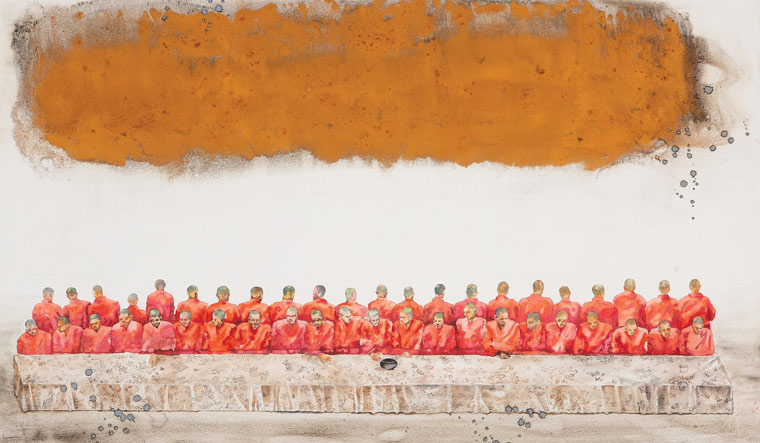 In G.R. Iranna's reworking of the painting 'The Last Supper', thirteen Theravada Buddhist monks are solemnly seated along a large rectangular table with a bowl of rice. The abstract work does not distinctly identify the figure of Christ. Behind this row, there are thirteen other ascetics with their backs facing the viewer. Almost like a mirror to the table, there is a large colour field style rectangular cloud in poignant yellow floating above the neatly lined assemblage of the robed monks, imbuing the watercolour with an aura of quietude and deep devotion.

The Last Supper painting is perhaps as wildly reproduced and reinterpreted as the Monalisa. Both are painted by the Renaissance rock star Leonardo da Vinci. For long, Indian artists have been drawn to dramatising the last meal Jesus shared with his apostles before his crucifixion. Think Jamini Roy whose early-career fascination for Christian themes led him to paint Christ with large, almond-shaped eyes in keeping with his trademark style inspired by the folk traditions of rural Bengal. In Francis Newton Souza's 1990 take, the apostles with their grim, distorted faces are huddled behind a table with a long-necked Christ staring presciently ahead. But one of art history's most famous paintings, which no one has really seen since the 16th century, continues to inspire and intrigue.

In Krishen Khanna's 2005 revisiting of the masterpiece titled 'The Last Bite', the apostles are replaced by the likenesses of Khanna's contemporaries like M.F. Husain, Akbar Padamsee, Bhupen Khakhar, Jogen Chowdhury, Tyeb Mehta and even Bhanu Athaiya, among other Indian modernists. In Jagannath Panda's acrylic and fabric on canvas, the perception techniques of Italian Renaissance painter Andrea Mantegna are referenced in the way the artist creates an elegantly circular ceiling in the sky from where Jesus and his apostles look down at humanity beneath a whirling mass of clouds. In Binoy Varghese's Last Supper, there are female apostles of South Asian origin while K. Laxma Goud recreates them as men of South or West Asian origin in their region-specific robes.

Poet, art critic and culture theorist Ranjit Hoskote in an accompanying essay titled 'The Perennial Mystique of The Last Supper' points out how Christian themes have captivated Indian artists for long. "This would be the proper occasion to recall that Christianity has been present in India since at least 52 CE, and has been continuously practised in the subcontinent for two millennia. It is unfortunate that some motivated commentators associate it solely with the colonial encounter," he writes. "This would be the occasion, also, to remind ourselves that Christian themes had fascinated Indian artists long before the advent of modernism, during the sixteenth and seventeenth centuries."

The exhibition is on view online at Saffronart till April 16.